Our Lady of Grace Catholic Academy in Brooklyn today hosted a “Wear Lime Green” donation dress-down day to show their support and raise money for 7th grader Marco Wilen who has recently been diagnosed with Non-Hodgkin’s Lymphoma.

In addition to the dress-down, the fundraiser included the sale of desserts and treats donated by Frost-A-Cake. There was also a basketball tournament for the students of grades 4-8, featuring a Free Throw and Three-Point contest which was also part of the fundraiser.

Financial donations are still being accepted and can be made by sending a check payable to Our Lady of Grace Catholic Academy in Brooklyn with “Marko” written on the envelope, or through Venmo @OurladyofGraceschool-AlumniAss. All funds raised will support his family and medical-related expenses.

Kelly Wolf is the Principal of Our Lady of Grace Catholic Academy located in the Gravesend section of Brooklyn.

BROOKLYN CATHOLIC ACADEMY WILL NOT RE-OPEN FOR NEW SCHOOL YEAR

The Board of Members and the Board of Directors of St. Francis Xavier~Queen of All Saints Catholic Academy, located at 300 Vanderbilt Avenue in Brooklyn, have voted to close the school effective August 31, 2019. The immediacy of this decision has been prompted by a 30% decline in enrollment since the 2018-2019 school year concluded in June.

This drastic reduction in student enrollment has significantly increased the negative fund balance of $676,639 projected for the 2019-2020 school year. This growth of this financial debt combined with the decline in enrollment, has made St. Francis Xavier~Queen of All Saints Catholic Academy unsustainable. Tuition for the upcoming school year was slated for $4,650 per student, with actual costs totaling $13,825 per year per child.

“This decision was not an easy one to make and took much discussion on the part of the Members of the Academy. It comes after many efforts on the part of the diocesan support staff to maintain a financially viable and high-quality educational program in this section of Brooklyn. We regret that factors beyond our control led to this decision so close to the start of the school year,” said Thomas Chadzutko, Ed.D., Superintendent of Schools for the Diocese of Brooklyn, and Chairperson of the Board of Members.

“We are most appreciative of the leadership and efforts of the administration, faculty, and staff for all that they have tried to do to sustain St. Francis Xavier~Queen of All Saints Catholic Academy. We also recognize the efforts and support of the parents. We understand the impact this decision will have on the students and their families and will assist them in the transition,” continued Dr. Chadzutko.

A parent information night has been scheduled for Tuesday, August 20 at 6:30 PM to assist families in enrolling their child(ren) in a neighboring Catholic Academy. Representatives of various schools, including Queen of the Rosary, St. Gregory the Great, St. Francis of Assisi, St. Joseph the Worker, and St. Saviour, will be in attendance to assist with the registration process. A full list of Catholic schools available in the Diocese of Brooklyn & Queens is available at www.dioceseofbrooklyn.org/schools/find-a-school.

Prior to the merger of St. Francis Xavier and Queens of All Saints Catholic Academy in June 2018, enrollment was declining, with 213 students in the 2013-2014 school year to 122 students in the 2017-2018 academic year. The demographic change in Park Slope/Fort Greene and Clinton Hill has been the primary factor impacting Catholic education in the area.

I, the undersigned Bishop of Brooklyn, decree that the Church of Saint Rocco, located at 216 27th Street in the Borough of Brooklyn, which is within the territory of the Parish  of Saint John the Evangelist is hereby RELEGATED TO THE PROFANE BUT NOT SORDID USE according to the provisions of Can. 1222 §2.

After a careful consideration of the pastoral and financial needs, a determination was reached that the cost of maintaining Saint Rocco as an additional worship site was prohibitive to both the Parish of Saint  John  the Evangelist as well as to the Diocese  of Brooklyn,  especially in light of the significant financial hardship being experienced by both entities.

Taking into consideration  the needs of the entire Diocese  of Brooklyn, especially in light of the shortage  of priests  available  for  ministry  as well  as the significant  financial  burden  that this structure is imposing on the Parish  of Saint John the Evangelist and in view of the current demographical shifts that have resulted in a diminished number of faithful in the surrounding area, I have decided to permanently relegate this space to the profane but not sordid use.

Reverend Kenneth J. Grande wrote to request that the Church of Saint Rocco be relegated from the sacred to profane. Prior to the issuance of this decree and in keeping with the universal norms of the Roman Catholic Church, after consultation with parishioners as well as the Episcopal Vicar for Brooklyn, the Reverend Monsignor Joseph Grimaldi,  and after having definitely determined that the care of souls would not suffer because of this decision due to the close proximity of the parish church, I consented to this reduction.

After having determined that no other parties can legitimately claim rights for themselves in the Church  of Sai.nt  Rocco,  I presented  this matter for consultation  to the Diocesan  Presbyteral Council  on Tuesday, March  5, 2019.  Having considered the matter carefully, the Council overwhelmingly supported my decision to relegate this structure.

Therefore,  having  carefully  followed  the  provision  set  forth  in  Can.  1222  §2  and  having determined with moral certitude that the care of souls would suffer no determent,  I declare that this decree will take effect thirty days (30) after its publication and that by virtue of the same the Church of Saint Rocco will no longer be used for divine worship. In addition, I order that any sacred furnishing and artwork, which the Parish of Saint John the Evangelist does not retain for its own use, be disposed of in a manner befitting their character and the known intentions of any donor. Furthermore, in addition to the usual requirements of law for the valid and licit alienation by the parish of the property concerned, the sale of the church is subject to my approval as being constant with the requirements of Can. 1222 §2.

Given in Brooklyn, New York, this 9th day of April in the Year of Our Lord, Two Thousand and Nineteen. 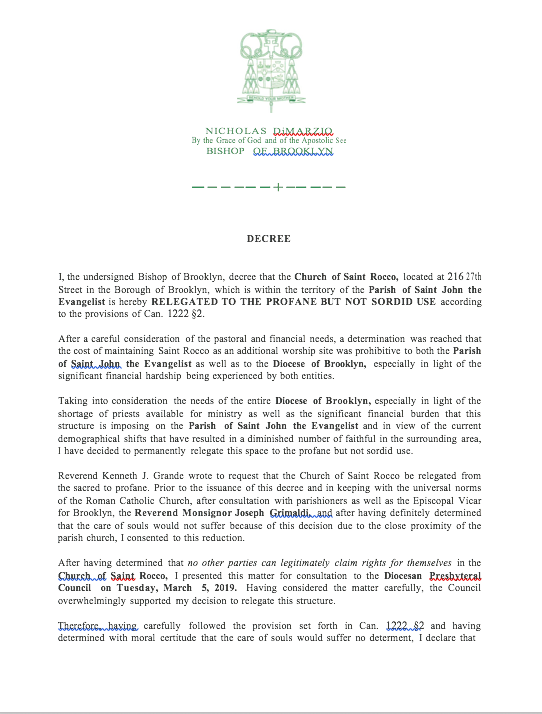 Brooklyn – St. Anselm Catholic Academy Principal Kevin Flanagan has announced that the school’s STEM (Science, Technology, Engineering, and Math) and Science Fair will take place tomorrow, Wednesday, March 27, 2019, at 7:00 pm at 365-83rd Street, Brooklyn. Projects from students of all grade levels will be on display.

Students from Pre-K 3 through 3rd grade will present class projects such as “Gummy Bear Science”, “Color Absorption” and “Colorful Carnations.”

Students in Grades 4-8 will compete individually on their grade level with projects such as a dancing robot, a solar car, fluorescent food, dance pad mania, a hydraulic hand and an experiment to discover which kind of wrapping prevents apples from browning.

Members of the media are invited to attend and encouraged to RSVP.

Young adults of Williamsburg! On Thursday, February 25th at 6:45 PM, please join us at Divine Mercy Parish for our second Young Adult Holy Hour! Mother Revelacion, SSVM, will give a special meditation on chastity and Divine Mercy for the Holy Year of Mercy. Dinner at Carmine’s to follow. Hope you can join!

For more information about Diocesan events, go to meetmein.church.

St. Joseph’s Seminary and America Magazine have created a partnership in presenting topics of interest to Catholics in and around New York. Last year, we had three lectures, Flannery O’Connor and her writing of Prayer Journal, Catholic Media, and Pope Francis and the Internet.

To kick off the 2015-2016 academic year, we are hosting a lecture on “Discussing Latino Catholicism” with Professor Timothy Matovina, Ph.D. Professor Valerie Torres, Ph.D, will respond, and the lecture will be moderated by Fr. Matt Malone, S.J. The event will take place at the Sheen Center for Thought and Culture on October 15, from 5:30 PM to 8:30 PM. The Sheen Center is located in Manhattan, 18 Bleecker St.  I am including the flyer which is more detailed on the evening’s event.

For further information, see the flyer below.

The “Young Composers” concert at Saint Saviour Catholic Academy last week featured Filipo’s piece.  Professional musicians were brought in to play the pieces composed by 5th and 6th graders -a program brought to them by to them by their music teacher, Ted Stafford.  Filipo is a 5th grader and a parishioner.

END_OF_DOCUMENT_TOKEN_TO_BE_REPLACED

Students from the Aquinas Honors Society gathered to present their work in Brooklyn and Queens at the Diocesan Aquinas Expos. Students use their “passports to learning” during the expo to visit and learn from other student expositions, in addition to presenting their own work. They sign each others passports as they go and the event concludes with Mass.

END_OF_DOCUMENT_TOKEN_TO_BE_REPLACED

May 20, 2015 – Excerpted from Put Out Into the Deep, Bishop DiMarzio’s column in The Tablet.

My dear brothers and sisters in the Lord,

Each year, DeSales Media Group sponsors a celebration of World Communications Day with a conference inviting members of the Diocese to explore how they can become better communicators of their faith. This year, this day coincides with the celebration of Pentecost where the initial communication of faith was made by the Holy Spirit who set the Apostles forth.

Our keynote speaker was Dr. Austen Ivereigh, journalist and author of “The Great Reformer: Francis and the Making of a Radical Pope,” which I thoroughly enjoyed reading. This unauthorized biography of our Holy Father traces his development from simple Jesuit to the Office of Supreme Pontiff.

Read the full text of the Bishop’s column on The Tablet website.