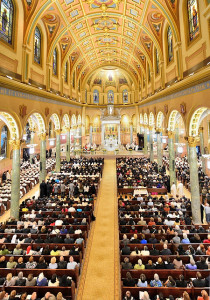 Construction of St. Joseph’s, located on Pacific St. between Vanderbilt and Underhill Avenues in Brooklyn, was begun in 1912 in the Spanish Colonial style. It is the third church on that site and replaced the previous buildings that had been serving the large immigrant population that was moving into the city of Brooklyn. It was dedicated on May 3, 1914.

St. Joseph’s comfortably seats 1,500 people and served a congregation that at one time, according to parish records, swelled to 30,000 on any given Sunday.

The history of the parish traces itself to 1851, predating the establishment of the Diocese of Brooklyn in 1853. St. Joseph’s was the eighth parish to be established on Long Island. Its first pastor was Father Patrick J. O’Neill, who served there until 1867.

The church was designed by F. J. Berlenbach, a Brooklyn architect. It was built of glazed brick and terracotta. The Alexander F. Locke Decorative Co., a Brooklyn firm, was responsible for the design and execution of the stained glass windows. The altar and baldacchino, as well as the pulpit and four side altars, were designed by Cav. Domenico Borgia.

In recent times, the neighborhood has felt the impact of significant demographic change. Gentrification has changed the face of the neighborhood and Forest City Ratner’s redevelopment of the Atlantic Yards, which includes the Barclay’s Center, will bring an estimated 16,000 new residents.

The church was designated as a Co-Cathedral for the Diocese of Brooklyn on Feb. 14, 2013 by Pope Benedict XVI.

One year later the church was dedicated and consecrated the altar of the Co-Cathedral of St. Joseph, 856 Pacific Street in Prospect Heights, on May 13, 2014.