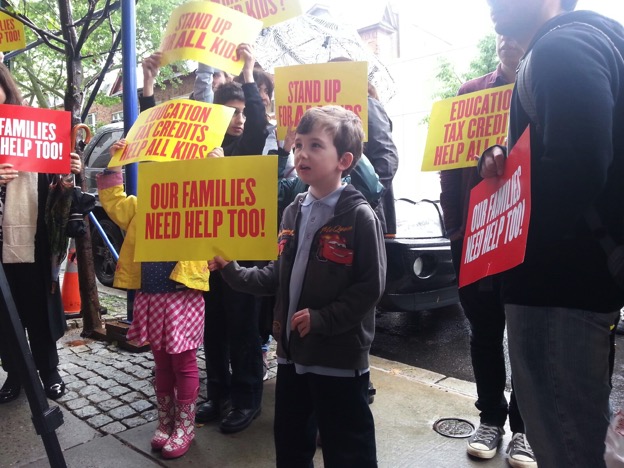 Queens, NY – Dozens of students, parents and faculty from St. Sebastian School joined parishioners from St. Sebastian Church, both located in Assembly District 37, to hold a peaceful and respectful rally Tuesday outside Assembly Member Catherine Nolan’s Sunnyside office to call on her to support the Education Investment Tax Credit bill, currently up for passage in the Assembly.

The bill, which would benefit children by expanding private K-12 scholarship opportunities and increasing resources for public school programming, has the wholehearted endorsement of Governor Cuomo. The State Senate version has already been passed, but the legislation remains stalled in the State Assembly. Despite widespread support for the Education Tax Credit, Assembly Member N

olan has actively opposed the legislation. Even more concerning is that Assembly Member Nolan’s opposition to a bill that stands to improve the educational options of so many children in her district and throughout the state, comes not just as the Assembly representative of the 37th district, but as Chair of the Assembly Committee on Education. That is why on Tuesday, more than 40 people representing the parochial school communities of Woodside and Sunnyside took to the sidewalks in front of her office to urge her to support their schools and their families.

JoAnn Dolan, the veteran principal of St. Sebastian School, located on 58th St. in Woodside, Queens, said: “A great many of our families are working families and our children need scholarships to attend. We serve the children of Queens, who are elite in their desire to learn but not in their economic status. This bill will help them and thousands of children just like them who want a better future but cannot afford it.”

Take a few moments to demand that your legislators enact the Education Tax Credit before they conclude their work in mid-June. Go to nyscatholic.org to send an email to your lawmakers. You’ll also be prompted to call your lawmaker’s office, which we urge you to do.

Thank you for doing your part in fighting for our families, kids and schools! Please act today – for the sake of our children, families and schools!