The ICCA Aquinas Society has had a busy opening school month in September. 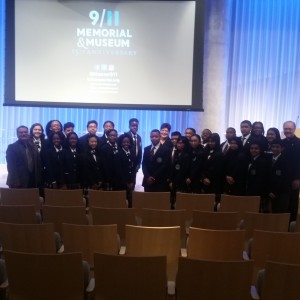 1)On the first full day of school, Monday, September 12 they were invited to visit the 9\11 Museum. The Education Department at the Museum offered the ICCA Aquinas students the opportunity to participate in the first ever Webinar Event at the museum to commemorate the 15th anniversary of 9/11 that was broadcast across the United States.

The Special Guest at the webinar who greeted the students was Ada Dolch, the former principal at the Leadership & Public Service High School in Manhattan located three blocks south to the World Trade Center and displaced by the September 11 attacks. The day of the attack Principal Ada Dolch was on the street welcoming voters to the school’s polling booths and was on the street when the first plane hit. She suspected immediately that her sister, a Cantor Fitzgerald employee, very likely hadn’t survived the first attack and focused on evacuating students and teachers safely. Dolch evacuated the 14-story school building leading the students safely down to Battery Park. 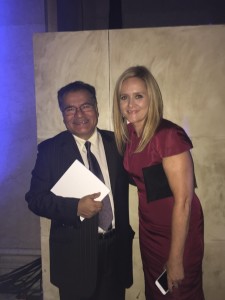 Ms. Dolch told the story of that day, filled with many harrowing details. She spoke about how her faith overcame so many of the tragedies of the day. The Aquinas students where offered an opportunity to ask questions along with other student from all 50 states. After the broadcast Ada stayed and talked with the ICCA students and communicated her great love and faith in people. It was for the adults present and for the students a life changing event.

2) On the evening of September 7, Mr. Ballenas, moderator of the ICCA Aquinas Society was the only teacher invited to speak at the 9\11 Benefit Gala at Cipriani on Wall Street. It was hosted by former Mayor Bloomburg and comedian Samantha Bee. Mr. Ballenas was very excited to be there and said they raised $3 million dollars that night, He was thrilled to meet Bon Jovi who was the musical guest. 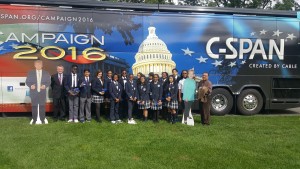 3) On September 28 the ICCA Aquinas students were invited by Brian Browne, the Vice President of Government Relations at Saint John University to board the 2016 C-SPAN Campaign bus. It was a great experience and they learned about the upcoming 2016 election.

4) On September 7 the world was able to see the premiere broadcast of the segment of City Of Churches about their parish, Immaculate Conception. They were the script writers for the segment.