A South Brooklyn parish is looking for a part time secretary for 25 hours per week (5 hours a day, 5 days a week). Qualifications include:

Qualified candidates should email a resume and references to smoffitt@diobrook.org

Most Reverend Nicholas DiMarzio, Bishop of Brooklyn, regrets to inform you of the death of Reverend Monsignor Conrad R. Dietz, retired senior priest of the Diocese of Brooklyn, who was in residence at the Bishop Mugavero Residence. Monsignor Dietz was born on August 13, 1931, in the Bronx, was ordained to the Priesthood on June 1, 1957, and died Wednesday, September 27, 2017, at Northshore Manhasset Hospital.

Monsignor Dietz served the Diocese of Brooklyn as Parochial Vicar of Our Lady of Grace (Howard Beach) and Holy Name of Jesus (Brooklyn). He served as a member of the Faculty at Cathedral College (Brooklyn), Cathedral Preparatory School and Seminary (Elmhurst), Cathedral College (Douglaston), House of Formation (Douglaston), and Cathedral Seminary House of Formation (Douglaston). He also served as Adjunct Professor at Immaculate Conception Seminary (Huntington). On March 10, 1999, he was named Prelate of Honor to His Holiness.

Monsignor Dietz was a member of the Priests’ Purgatorial Society. All priests are invited to concelebrate the Liturgy. Please bring your diocesan vestments.

The Diocese of Brooklyn will host the first annual Catholic Day at Citi Field on Saturday, September 9, 2017. The day will begin with a 9:45 a.m. Mass, celebrated by the Most Reverend Nicholas DiMarzio, Bishop of Brooklyn. The Mass will be followed by food, games, entertainment, and baseball as the New York Mets take on the Cincinnati Reds.

The event is part of the Diocese’s Year of Vocations Campaign, an effort to encourage young people to think about, pray for, and discern their life’s calling.

For the schedule of events at Catholic Day at Citi Field, click on this link: catholicdaynyc.oncell.com

As part of Catholic Day, the Diocese will ask baseball fans to contribute to “Catholics Care,” a volunteer effort, and text-to-donate campaign for Hurricane victims across the country. Fans can text “Catholics Care” to 917-722-4565.

DIOCESE OF BROOKLYN’S YEAR OF VOCATIONS:

The Diocese of Brooklyn’s Year of Vocations campaign is targeted toward young people of faith who are looking to understand God’s unique purpose for their lives. The initiative educates young Catholics about single and married life in the Church, as well as about becoming a deacon, nun, or priest.

In an effort to encourage more young men to consider becoming priests, the Diocese has created a video showing an unexpected side to the lives of the clergy. The video shows priests surfing, skateboarding and doing martial arts. The friars seen playing basketball in the video will be playing on site at Catholic Day at Citi Field.

The Year of Vocations campaign aims to show young people that serving God does not mean losing the unique qualities that make us who we are. Father Peter Purpura, rector of Saint James Cathedral Basilica, who is featured doing martial arts in the video, said, “Young men should realize that when you become a priest, you bring with you all of your passions, interests, and hobbies. All of these things are what make each priest unique, and in many cases, uniquely effective. Generally, I think that people focus too much on the negative aspects of the priesthood; what we give up or what we don’t have. The truth is that priests receive far more than we give, which is the reason for our priestly joy.” Fr. Purpura will be available for interviews.

DeSales Media, parent company of the Tablet and NET-TV, is coordinating a Catholics Care response to the devastation of Hurricane Harvey in Texas. In partnership with Catholic Charities of the Archdiocese of Galveston-Houston, the Diocese of Brooklyn is organizing a mission trip for 50 individuals from Brooklyn and Queens to Houston to help hurricane victims. Join us November 12-18, 2017 as we rebuild the cities, homes and lives of those affected by these natural disasters. Read more about the Catholics Care mission trip to Houston in The Tablet.

Here are some ways you can help.

Volunteer Your Time:
To help, just email catholicscare@desalesmedia.org and we’ll be in touch soon. Thank you for your support!

Donate Now:
Make an online donation to aid in the recovery efforts in the wake of Hurricanes Harvey and Maria.
Text “Catholics Care” to (917) 722-4565 to donate via SMS. (Standard text messaging rates apply.)

Donate Clothing And Supplies:
Parishes throughout the Diocese of Brooklyn are collecting supplies to send to victims of Hurricanes Harvey and Maria. Contact your parish to find out the details! 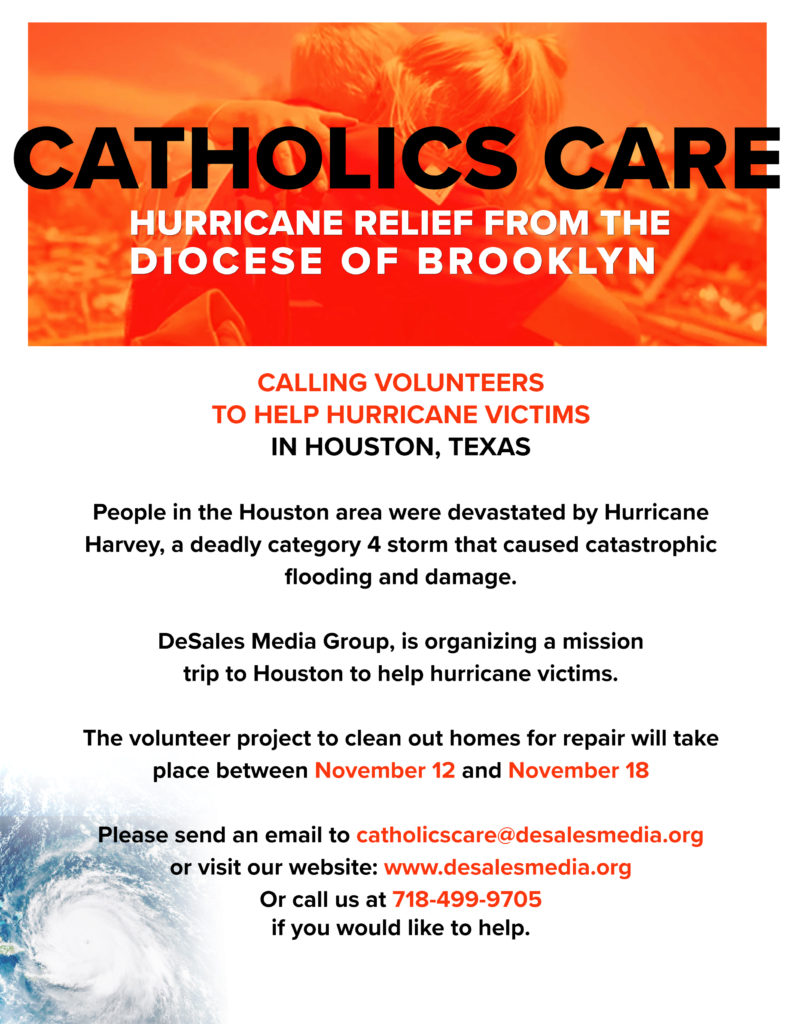 Today my prayers are with the young undocumented people in our Diocese who now face an uncertain future due to the Trump Administration’s decision to formally end the Deferred Action for Childhood Arrivals program. We are disappointed with the President’s decision to end DACA, as there are many undocumented Dreamers in our diocese who have now lost their sense of security in the only country they know to be home.

The Obama-era program had shielded young undocumented immigrants, a group called Dreamers, from deportation. It was their parents who first dreamt of a life in America with the opportunity to find jobs, and secure a solid education for their children. Now those children brought to the U.S. by their parents, through no fault of their own, face deportation to countries to which they feel no connection. They only know America as their home.

And, make no mistake, these young people are contributing to our society. A paper released last year by the Center for Migration Studies of New York found 90% of DACA recipients are employed, and more than 90% have at least a high school degree.

The Trump Administration has now given Congress a window of six months to replace the DACA program with legislation or else it will end on March 5, 2018. So today, we stand with the Dreamers, and we call on Congress to come up with a legislative alternative that provides protection for them.

For media interested in interviews, we can connect you with Catholic Migration Services to speak with someone about what this means for their clients. CMS has helped countless immigrants in our Diocese with immigration and legal services for decades and has also been helping young immigrants with their DACA applications.

We can also connect you with a Dreamer who is willing to share their fears in light of this DACA decision.

Most Reverend Nicholas DiMarzio, Bishop of Brooklyn, regrets to inform you of the death of Reverend Charles B. Kehoe, a retired senior priest of the Diocese of Brooklyn, who was in residence at the Bishop Mugavero Residence. Father Kehoe was born on October 1, 1931 in the Bronx, was ordained to the Priesthood on May 26, 1973, and died Thursday, August 24, 2017, at Long Island Jewish Medical Center.

The Most Reverend Nicholas DiMarzio, Bishop of Brooklyn, will announce the establishment of a new diocesan commission for social justice during a special Mass Thursday, August 24 at 7:30 PM. The Mass for Solidarity and Peace is in response to the violent and deadly protests in Charlottesville. The Mass will be held at the Cathedral Basilica of St. James, 250 Cathedral Pl, Brooklyn. Bishop DiMarzio will be the main celebrant and Reverend Alonzo Cox, Vicariate of Black Catholic Concerns, Coordinator of Ministry for African American Catholics, and the Pastor of St. Martin De Porres Parish, will concelebrate.

The new diocesan commission will address racism in the Church and society at large. It will be named after Monsignor Bernard Quinn, a Diocese of Brooklyn priest targeted by the Klu Klux Klan. The Klan burned down an orphanage Monsignor Quinn built for African American children, not once, but twice in the same year. Monsignor Quinn received numerous death threats. But he did not back down. He stood up to racism and rebuilt. He was valiant, pledging to his parishioners, ‘I would willingly shed to the last drop my life’s blood for the least among you.’ Monsignor Quinn also established the first African American church in the Diocese of Brooklyn.

“Monsignor Quinn is our own diocesan hero,” said Bishop DiMarzio. “In his name, we will address the social and religious problems that racism presents.”

The United States Conference of Catholic Bishops has also just announced plans to establish the Ad Hoc Committee Against Racism. According to Cardinal Daniel N. DiNardo, President of the USCCB, the committee “will be wholly dedicated to engaging the Church and our society to work together in unity to challenge the sin of racism, to listen to persons who are suffering under this sin, and to come together in the love of Christ to know one another as brothers and sisters.”

Thursday’s Mass for Solidarity and Peace will remind the faithful of Brooklyn, Queens, and beyond, that we are all created as children of God. Together we will pray for those injured and killed in Charlottesville, for the healing of our nation, and for all those who have allowed the seeds of hatred to grow in their hearts.

Most Reverend Nicholas DiMarzio, Bishop of Brooklyn, regrets to inform you of the death of Reverend
Michael A. Vendetti, a retired priest of the Diocese of Brooklyn. Father Vendetti was born on May 6,
1937 in Brooklyn, New York, was ordained to the Priesthood on May 30, 1964, and died Sunday,
August 20, 2017, at his private residence.

Father Vendetti served the Diocese of Brooklyn as Parochial Vicar of the Parishes of Our Lady of
Miracles (Brooklyn), Our Lady of Grace (Brooklyn) and Saint Stanislaus Kostka (Maspeth).

Father Vendetti was a member of the Priests’ Purgatorial Society. All priests are invited to
concelebrate the Liturgy. Please bring your diocesan vestments.

In lieu of flowers, donations may be made to the Cathedral Preparatory School and Seminary, 56-25
92nd Street, Elmhurst, New York 11373.

WHO: The Most Reverend Nicholas DiMarzio, Bishop of Brooklyn, and the Diocese of Brooklyn’s Ministry for African American Catholics invite the faithful of Brooklyn, Queens and beyond.

WHAT: In response to the recent violence in Charlottesville, Virginia, Bishop DiMarzio will celebrate the Mass for Solidarity and Peace. Reverend Alonzo Cox, Vicariate of Black Catholic Concerns, Coordinator of Ministry for African American Catholics, and the Pastor of St. Martin De Porres Parish, will concelebrate.

WHY: The tragic events that unfolded in Charlottesville, Virginia, revealed a nation still tainted by the evils of racism, bigotry, white supremacy and neo-Nazism. “As Catholics, our greatest weapon against hatred, violence, and anger is prayer,” said Reverend Cox. The Mass will bring together the faithful of Brooklyn, Queens, and beyond, to pray for our nation, the three people who lost their lives, the many more injured, as well as all those who have allowed the seeds of hatred to grow in their hearts.

We must condemn the violent acts of hatred in Charlottesville, Virginia.

Please join me in praying for those injured and killed and for all those who have been the victims of racism and bigotry. We must also pray for those who have allowed the seeds of hatred to grow in their hearts.