The Diocese of Brooklyn is proud to announce that St. Edmund’s Catholic Academy student Caitlyn Ngo has been selected as the 5th Grade Grand National Champion in the Zaner Bloser 2021 National Handwriting Contest, the most prestigious handwriting contest in the United States.

This year marked the 30th Anniversary of the contest, which recognizes student excellence in manuscript (print) and cursive writing. Student entries from grades K-8 are initially part of a school-only handwriting contest and then best entries are submitted to the state competition. The state winners, one from public school and one from private/parochial school from each grade, are then advanced to the competition’s national level for a chance at being selected as the Grand National Champion for their grade.

“We are so proud of Caitlyn for her outstanding achievement. St. Edmund Elementary School’s yearly participation in the Zaner-Bloser National Handwriting Contest exemplifies our dedication to providing our students with a comprehensive educational program that prepares them for success in the future,” said Andrea D’Emic, Principal of St. Edmund’s Catholic Academy.

Additionally, Holy Family Catholic Academy in the Fresh Meadows section of Queens, is proud to announce that Kindergarten student Arron Morocho and 1st Grader Jake Mulryan were selected as state champions for best manuscript/cursive handwriting among hundreds of other students across New York State.

For the third year in a row, Holy Family Catholic Academy has had at least one student recognized as a New York State winner at their grade level. Last year Isabella Ordonez was State Champion for 1st Grade, and in 2019, Philip Saffian was 2nd Grade State Champion and Grand National Championship.

Photos courtesy of the Diocese of Brooklyn.

Photo #1 – Caitlyn Ngo of St. Edmund’s Catholic School displays the trophy she was awarded upon being selected as the 5th Grade National Champion in the Zaner Bloser 2021 National Handwriting Contest. 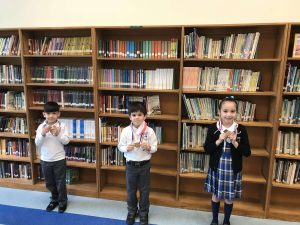 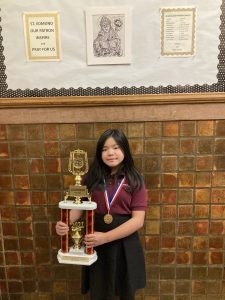