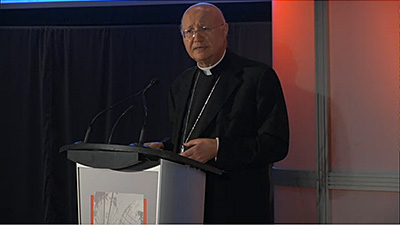 Archbishop Claudio Maria Celli, the originator of the Pope’s Twitter account, came all the way from the Vatican to speak at the Diocese of Brooklyn’s media conference on World Communications Day.

The archbishop spoke on Thursday at the Brooklyn Bridge Marriott about the intersection of social media and faith in today’s world. He called for embracing modern means of communication, and for engaging believers and nonbelievers alike with straightforward language via social media.

For more on his speech, which was streamed live on netny.tv, see #WCD2014 on Twitter.