The topic of this year’s essay contest was “What does the Pledge of Allegiance mean to you?” The national winners were selected from entries submitted to local chapters of the Catholic War Veterans by students of grades 6-8.  The judging was based on the essay’s overall patriotic impact as well as skillful writing technique.

“Immaculate Conception Catholic Academy is honored by Olivia’s accomplishment, but we are most proud by how Olivia expressed in her essay her true love and appreciation for our Country,” said Brother Joseph Rocco, Principal.

Olivia Mills was awarded a bronze medal and monetary prize from the Catholic War Veterans, and a Special Citation presented to the school in honor of her achievement. 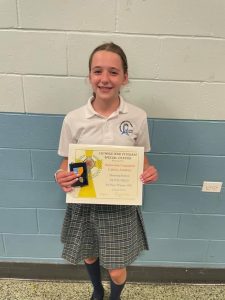 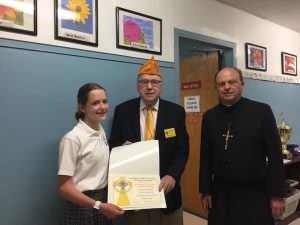