DIOCESE OF BROOKLYN VICAR FOR COMMUNICATIONS

The Most Reverend Nicholas DiMarzio, Bishop of Brooklyn, is pleased to announce the appointment of the Reverend Monsignor Kieran E. Harrington, as the new national director of the Pontifical Mission Societies. The appointment was made by Cardinal Luis Antonio Tagle, Prefect of the Vatican Congregation for the Evangelization of Peoples. The Pontifical Mission Societies are organizations under the direction of the Holy Father, Pope Francis. Their purpose is the promotion of a universal missionary spirit among all baptized Catholics.

“I have worked with Monsignor Harrington in many capacities for the past 17 plus years, five of which were spent living at the Bishop’s Residence, and I know his selection for this assignment is the absolute right choice. There has always been an extraordinary desire within him to bring the good news of Jesus Christ, and the Christian faith, to the people not only of his parish, but throughout the world. Monsignor Harrington will excel in this position because of this deep faith and motivation to evangelize. The Universal Church will benefit because of Msgr. Harrington’s devotion to Our Lord, and to the people the Catholic Church is called to serve,” said Bishop Nicholas DiMarzio.

“I am grateful to Bishop DiMarzio for his tutelage and the confidence he entrusted to me as Rector/pastor of the Co-Cathedral of Saint Joseph and Church of St. Teresa. Moreover, I am grateful for the opportunity to have served as Vicar for Communications for the Diocese of Brooklyn, and President and Chairman of DeSales Media,” said Monsignor Harrington. “I am also thankful to Cardinal Tagle for this opportunity to serve the Universal Church in this national ministry to re-awaken the missionary impulse in each of us, which is at the heart of our baptismal calling.”

“It has been a privilege over these last thirteen years to oversee the restoration and rebirth of the Co-Cathedral of St. Joseph.  During this tenure, I was delighted to witness a springtime of renewal in parochial life. Likewise, drawing together a faith-filled and talented team of professionals to face the myriad and complex challenges of communicating the Gospel message in a rapidly changing, secular, and sometimes hostile media environment has enabled me to grow spiritually and professionally.  I am indebted to colleagues and parishioners for helping me to grow in my faith and life as a Christian,” said Monsignor Harrington.

“Monsignor Kieran Harrington, while serving as Rector of the Co-Cathedral of St. Joseph, where he oversaw the beautiful restoration of the church, and Pastor of St. Teresa of Avila, was able to take on many of the great challenges facing our Diocese. Under his leadership with DeSales Media, he has led efforts to upgrade technology in our schools and churches, has significantly enhanced the digital and social media presence of the Diocese of Brooklyn, and has worked to grow the presence of our local Catholic media. I thank Monsignor Harrington for his years of service which have allowed him to share his many talents with us, as a true pastoral and communications leader. I ask the Lord to bless him as he takes this new role in the Church,” continued Bishop DiMarzio.

Monsignor Harrington graduated with honors from St. John’s University with a Bachelor’s degree in Philosophy. He holds a Masters of Divinity from the Seminary of the Immaculate Conception and an MBA from the New York University Stern School of Business.

Monsignor Harrington is a Knight of the Equestrian Order of the Holy Sepulchre, a Knight of Columbus, and a member of the Ancient Order of Hibernians. He serves on the boards of the Futures in Education Foundation, the Catholic Technology Network, and Cristo Rey Brooklyn High School. He is the recipient of numerous awards and honors, including the Saint Thomas More Award of the Catholic Lawyers Guild, the Father Mychal Judge Award at the Great Irish Fair in Brooklyn, New York, and the John Paul II Distinguished Stewardship Award.

Monsignor Harrington succeeds Father Andrew Small, OMI, who is completing his second five-year term as director of the Pontifical Mission Societies. The four societies, the Society for the Propagation of the Faith, the Holy Childhood Association, the Society of St. Peter the Apostle, and the Missionary Union of Priests and Religious each received the title “pontifical” in 1922 to indicate their status as official instruments of the pope and of the universal Catholic Church. The national director heads the four societies in the United States and oversees the World Missions Sunday Collection, which is taken up on the third Sunday of October each year. 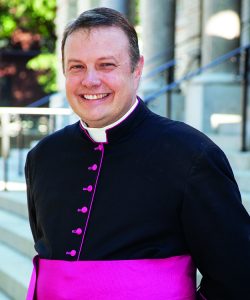