The Diocese of Brooklyn and DeSales Media Group will light a 35-foot Christmas tree in more than 14,000 lights tonight, Tuesday, December 8, 2020, at 5 p.m., in front of the Soldiers and Sailors Memorial Arch located at 20 Grand Army Plaza in Brooklyn.

Bishop Nicholas DiMarzio will also officially unveil and bless a replica of the Angels Unawares sculpture, designed by Canadian artist Timothy Schmalz. The reproduction depicts a raft packed with migrants and refugees representing diverse cultures and different times in history.

The 20-foot-long, 12-foot-high, and 3.8-ton reproduction has arrived in Brooklyn as part of its tour of the United States. The bronze sculpture has made stops in San Antonio, Texas, South Bend, Indiana, and Boston College. Through the support of local benefactors, Angels Unawares will be on display at Grand Army Plaza until January 3. It will be permanently installed next year at the Catholic University of America in Washington, D.C.

Those represented among the 140 figures include a Jewish person fleeing Nazi Germany, a Syrian escaping that country’s civil war, a Polish woman running from the communist regime, a Cherokee on the Trail of Tears, an Irish boy escaping the potato famine, and the Holy Family of Nazareth. Mother Cabrini, the Patron Saint of Immigrants, is also depicted in the sculpture. Angel wings are visible at the center, a symbol of the sacredness of the migrant and refugee.

The original sculpture was permanently dedicated at the Vatican in St. Peter’s Square in September 2019 to mark the 105th World Day of Refugees and Migrants. For more information on Angels Unawares, visit www.https://dioceseofbrooklyn.org/angels-unawares/

Members of the media are encouraged to attend. 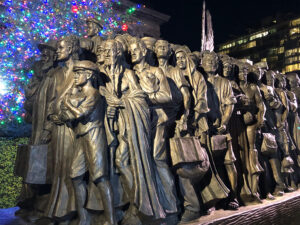 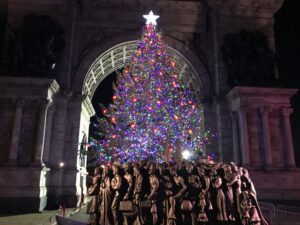 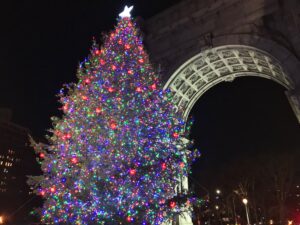