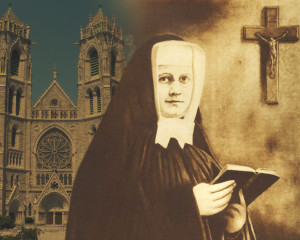 Saturday, October 4th, New Evangelization Television (NET TV) will broadcast live the Beatification of the Venerable Miriam Teresa Demjanovic from the Cathedral Basilica of the Sacred Heart of Newark.

“This is the first beatification to take place in the United States, ever,” said Archbishop John J. Myers of Newark. “In recent years, there has been an effort by the Vatican to bring these important liturgies to the actual countries where the saints are from,” he explained.

Venerable Sister Miriam Teresa Demjanovic was born in Bayonne, New Jersey, in 1901. She lived her religious life in the Garden State where she attended public schools, graduated from the College of Saint Elizabeth and entered the community of Sisters of Charity, both in in Convent Station, Morristown, NJ. She died in 1927 when she was only 26 years of age.

The liturgy will follow an official format provided by Rome, the same one performed in St. Peter Square in the Vatican City, and will be presided over by Angelo Cardinal Amato, Prefect of the Congregation for the Causes of the Saints from Rome. The Most Reverend Nicholas DiMarzio, Bishop of Brooklyn, will concelebrate.

Bishop DiMarzio was taught by the Sister of Charity of Saint Elizabeth, Convent Station at the Sacred Heart Cathedral School in Newark. “I have memories of praying for her beatification when I was in elementary school,” said Bishop DiMarzio. “Today is a joyful day, not only for the Sisters of Charity, but also for all who are the beneficiaries of their teaching apostolate.”
The liturgy will also include a procession with Sister Miriam Teresa’s relic carried by Michael Mercer, the young boy who was cured of macular degeneration in 1963 after prayers through her intercession.

Michael Mercer’s case was reviewed by many optometrists, who later declared the cure was medically unexplainable. After years of investigation, the Congregation for Causes of Saints approved the authenticity of this cure as miraculous and recommended to Pope Francis that Venerable Sister Miriam Teresa be listed among the Blessed in the Catholic Church.

Sister Miriam Teresa’s process for Beatification and Canonization was initiated by the Ecclesiastical Curia of the Diocese of Paterson in 1953. She was declared “Venerable” in 2012 by Pope Benedict XVI. In 2013, after an exhaustive study, her miracle was validated. She will be declared “Blessed” after the beatification ceremony.

This historical celebration will start at 9:30 a.m. Community members, Sisters of Charities, some of Sister Miriam Teresa’s relatives and Dr. Mary Mazzarella, a retired pediatrician who has been working on her cause for sainthood, are expected to attend.

The Beatification Mass will be broadcast live on NET TV and streamed on www.netny.tv. Encores will be available at 3 p.m. on Saturday and at 9 p.m. on Sunday. NET TV is a cable network featuring news and information with a Catholic point of view, and is available in the New York area on Time Warner Cable, channel 97, Cablevision, channel 30, and nationally on Verizon FiOS on Demand.