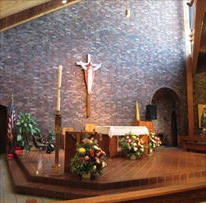 October 25, 2013 – On Tuesday, October 29th at 7:30 p.m., on the one-year anniversary of Hurricane Sandy, family and friends of one of the hardest hit parishes in the Diocese of Brooklyn will gather for a commemoration and healing Mass at St. Mary Star of the Sea in Far Rockaway.

After the super storm, thousands in this community flocked to the parish for relief. Within days, a disaster relief center was set up at the parish’s St. Gertrude’s location in nearby Edgemere, which helped many residents, both Catholic and non-Catholic.

Of the 1,200 parishioners of St. Mary of the Sea, over 60 percent are Spanish-speaking, including many undocumented immigrants who still feel the aftermath of the hurricane twelve months later.

Father Fulgencio Gutierrez, pastor, said the church has assisted people in many ways, including helping them pay rent and providing clothing for children.