VANDALISM DISCOVERED ON GROUNDS OF THE OFFICES OF DIOCESE OF BROOKLYN

The Roman Catholic Diocese of Brooklyn is announcing that a statue depicting the Blessed Virgin Mary holding her son Jesus, was vandalized over the weekend on the grounds of the Diocesan administrative offices, located at 310 Prospect Park West in the Windsor Terrace section of Brooklyn.

Jesus, held in the arms of His Mother Mary, was decapitated. The destruction was discovered by a facilities manager and immediately reported to the New York City Police Department. The crime is currently being investigated as a hate crime. The Diocese is already working towards repairing the statue to its original form.

This is the second incident in a matter of three days. During the early morning hours of Friday, May 14, a Crucifix was toppled and damaged, and an American Flag burned, at St. Athanasius Roman Catholic Church in Bensonhurst. Parishioners gathered Friday evening in prayer.

“We are definitely concerned that there is a pattern of hate crimes against Catholics. There was a hate crime at a Bensonhurst parish on Friday morning and now, just a few days later, this is act of hatred has been discovered at the Diocesan offices. The Diocese will be notifying our churches to be on alert, and we are asking the NYPD to increase patrols in and around the area of our churches. Hatred and intolerance of the Catholic faith, and for that matter any faith, has no place here,” said Monsignor Anthony M. Hernandez, Moderator of the Curia for the Diocese of Brooklyn. 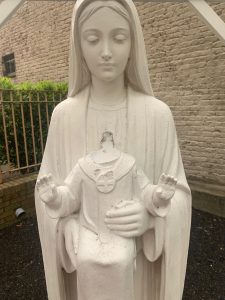