VICAR FOR CLERGY AND CONSECRATED LIFE AND

CHAIRMAN OF THE BOARD OF DESALES MEDIA GROUP

The Most Reverend Nicholas DiMarzio, Bishop of Brooklyn, is pleased to announce the appointment of the Reverend Monsignor Sean G. Ogle to serve as Vicar for Clergy and Consecrated Life, effective June 30, 2021. Monsignor Ogle has also been appointed the next Chairman of the Board of DeSales Media Group, the media, communications, and technology arm of the Diocese.

“I do not think there is anyone more qualified than Monsignor Ogle to be the next Vicar for Clergy and Consecrated Life and Chairman of the Board at DeSales Media. He is an excellent communicator and that will serve him well in both roles,” said Bishop DiMarzio.

Monsignor Sean G. Ogle, a native New Yorker, and son of Irish immigrants, has been the Pastor of Our Lady of Mount Carmel in Astoria, Queens, since 2008. His tenure will end on June 30, 2021. In his role as Vicar for Clergy and Consecrated Life, Monsignor Ogle will serve to support the priests and religious in their life and ministry of service to Catholics in Brooklyn and Queens. He will succeed Auxiliary Bishop Raymond Chappetto, who has been the Vicar for Clergy and Consecrated Life since 2009.

“I am exceptionally honored the Bishop has chosen me to succeed Bishop Chappetto, who has done a marvelous job. As priests, we are called to give pastoral care to the people of God, but to do that specifically for priests and deacons is a calling within a calling. I love my fellow priests and deacons and whatever I can do to help them be better shepherds is an honor and privilege,” said Monsignor Ogle.

Ordained to the priesthood in 1977 for the Diocese of Brooklyn, Monsignor Ogle has served as Parochial Vicar at St. Matthias in Ridgewood, St. Margaret Mary in Astoria, and St. Sebastian in Woodside, and as Pastor at St. Mary Star of the Sea in Far Rockaway. Throughout his 44-year priesthood, he has also been a faculty member at Cathedral Preparatory Seminary and has served in various diocesan apostolates, committees, and boards. Monsignor Ogle graduated with a Bachelor’s Degree in English from Cathedral College, a Master of Divinity from Immaculate Conception Seminary in Huntington, and a Master of Arts in English from New York University.

“I am honored to be asked to continue the ministry of DeSales Media. I deeply believe the whole work of salvation was an act of communication by God to humanity, that he was not giving up on us, despite original sin and actual sin.  And so, it is all about communication, the whole revelation of the Old Testament, the prophets and everything, and then culminating in Jesus Christ, who then gives us the Church to communicate to us the grace of the sacraments. It is all about receiving a message that God is there for us and that he would give us what we need to come back to Him,” said Monsignor Ogle. 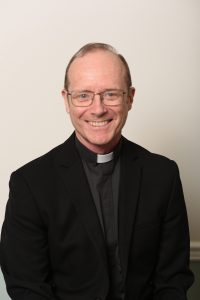