Below is the transcript of the homily delivered on Oct. 25, 2014 at the Diocesan Pilgrimage at the National Shrine of the Immaculate Conception in Washington D.C.: 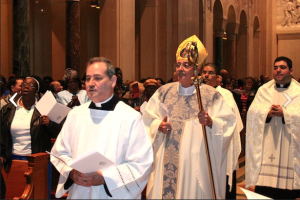 We come as a diocese once again to the beautiful Basilica of the National Shrine of the Immaculate Conception.  This year we dedicate our prayer and sacrifice for the persecuted Christians of the Middle East and all victims of terrorism.  Today, we have chosen the Mass of the Blessed Virgin Mary, Help of Christians because, indeed, the Christians of the Middle East are in need of her motherly intercession and care.  In our First Reading today, the Word of God goes directly to the entrance of evil into the world.  God created the world to be good.  Because of the disobedience of man and woman, however, evil entered the world.  The scene in the Book of Genesis portrays for us the cunning work of the serpent devil and the contradictory nature of evil itself.  The great theologian St. Thomas Aquinas taught that even when man or women choose evil, somehow each believe that they are choosing something that is good for him or her.  Yes, Adam and Eve wanted to know more.  They wanted to be like God.  And, so, when the serpent tempted Eve to eat of the fruit of the Tree of Knowledge which had been forbidden by God, she succumbs to that temptation and, in fact, took it to her husband and he too ate of the forbidden fruit.  The trick of Satan is still in our world today to present evil under the appearance of good.  Radical Islam, that today persecutes our brothers and sisters in Christ, appears to these people to be something good.  They must rid the world of those who will not accept their truth of Islam.  And so they pervert their own religion and ruthlessly take the lives of others, or force them to convert or displace them from their own lands.  Evil is not easily conquered, however, it is our Blessed Mother, Mary, who is our hope and intercessor.

Saint John Paul II, in his Encyclical Redeptoris Mater, said, “In the salvific design of the Most Holy Trinity, the mystery of the Incarnation constitutes the superabundant fulfillment of the promise made by God to man after original sin, after that first sin whose effects oppress the whole earthly history of man (cf. Gen. 3:15). And so, there comes into the world a Son, “the seed of the woman” who will crush the evil of sin in its very origins: “she will crush the head of the serpent.”  He goes on to say, “Mary, Mother of the Incarnate Word, is placed at the very center of that enmity, that struggle which accompanies the history of humanity on earth and the history of salvation itself. In this central place, she who belongs to the “weak and poor of the Lord” bears in herself, like no other member of the human race, that “glory of grace” which the Father “has bestowed on us in his beloved Son,” and this grace determines the extraordinary greatness and beauty of her whole being. Mary thus remains before God, and also before the whole of humanity, as the unchangeable and inviolable sign of God’s election, spoken of in Paul’s letter.”

In this history, Mary remains a sign of sure hope.  It is to Mary today to whom we have come seeking her intercession and maternal care for our persecuted Christian brothers and sisters.  We seek her help at the most critical times in our life, and when we pray the Hail Mary, and even at the moment of our death.  We pray for those Christians today who have died, those who are threatened, those who may be tempted to convert and give up their faith.  They need our prayers and our assistance.  We have tried to help them with our monetary sacrifices, however, we assist them also today by the sacrifice we have made by making this pilgrimage.  There is a way of looking at humanity that reminds us that man and woman are travelers.  They travel in this world constantly.  We have traveled on our pilgrimage from New  York to our Nation’s capitol on this truly sacred journey.  Our persecuted Christian brothers and sisters are refugees.  They too travel, but are fleeing for their lives and trying to protect their children.  Life is a constant pilgrimage towards the only life that really matters; eternal life.  All along the way we seek the light that comes from the morning star, Mary herself, who guides us on our pilgrim way in this life.

As we contemplate our Gospel today, we see the true meaning of Mary’s intercessory power.  On the cross, Jesus gave us His own mother in His last will and testament, written in His own blood on the cross.  She is always ready to help us, her children, but only if we ask.

But what is it that Mary asks of us?  At Cana, she simply asks the servants to do what Jesus tells them to do.  The servants were asked filled the six empty stone water jars with water.  Before their eyes, the water became wine.  Not just ordinary wine, but the best of wine.  The Fathers of the Church remind us that the water, in the presence of the creator, just blushed.  The water became red, symbolizing that one day the red blood of Jesus would save the world and eliminate the necessity of God’s continual intervention into the world.  We cannot forget that it was Mary, herself, who gave Jesus His blood when He was conceived in her womb by the power of the Holy Spirit.  The powerful maternal instinct of Mary brought to the light of life the Redeemer Himself.  Mary is the mother of the Redeemer, she is our mother and she is, as we call her today, the Help of all Christians.

As we return to the Altar and witness the miracle of the changing of bread and wine into the body and blood of Jesus Christ, which would never have been possible without the willingness of Mary to become the Mother of God, we solemnly invoke her intercession and ask that all who suffer persecution for the sake of the name of Christ, will never be left without her motherly care and intercession.  May the pain the suffering of those who bear the name Christian, and even so many others, be alleviated by the maternal intercession of Mary.