The Most Reverend Nicholas DiMarzio, Bishop of Brooklyn, this morning presented a medal on behalf of the Diocese of Brooklyn to honor local Catholic resident Sean Conaboy for his recent selfless act of courage in defense of a woman on a subway platform.

Mr. Conaboy was waiting for the train at the Union Square station on the evening of Wednesday, May 19, 2021, when a woman standing near him was repeatedly being stabbed on the platform. Conaboy immediately sprang into action, tackling the knife-wielding assailant and preventing the attack on the woman from continuing.

“It was an honor to be with Sean this morning and recognize him for his selfless sacrifice on behalf of his fellow New Yorker. Sean was the Good Samaritan here when he stopped the attack and put his faith into action. The medal presented to him with the inscription that reads in part the ‘Word was made flesh,’ is telling of how we reach God through the humanity given to us by God. Sean has done that by the rescue of this person,” said Bishop Nicholas DiMarzio.

Mr. Conaboy is a parishioner of St. Michael’s Roman Catholic Church in Sunset Park. Bishop DiMarzio was joined by the Most Reverend Kevin Sweeney, Bishop of the Diocese of Paterson, New Jersey, who previously served as Pastor of St. Michael’s.

“Sean saw someone in need and he responded. Sean’s Catholic upbringing nurtured him and made him ready for that moment, with the help of the Holy Spirit and with the protection of St. Michael, he stepped into that battle and saved someone who was being attacked. As a native New Yorker, it is great to see New Yorkers being who New Yorkers are; we respond when others are in need,” said Bishop Kevin Sweeney.

“I am moved beyond words and say thank you to both Bishop DiMarzio and Bishop Sweeney. As honored as I am to be here, there is a victim in all of this, and it is not me. Kelli will have to find a way forward in her life, to heal emotionally and physically, and it is my sincere hope that she does. I think she deserves all of our prayers from this day forward,” said Sean Conaboy.

The photos attached are courtesy of the Diocese of Brooklyn.

Photo #2 – Bishops Nicholas DiMarzio and Kevin Sweeney join Sean Conaboy’s proud family for a photo upon his receiving of the recognition. 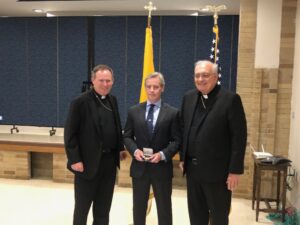 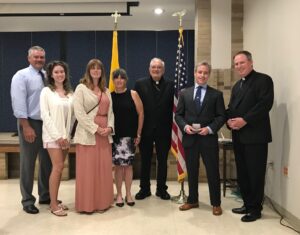