The Most Reverend Nicholas DiMarzio, Bishop of Brooklyn, is announcing his request for a special voluntary collection this weekend, January 18 and 19, at parishes throughout the Diocese of Brooklyn and Queens for victims of the recent earthquakes in Puerto Rico.

“We have all seen the painful images of the devastation caused by the multiple earthquakes in Puerto Rico. Our hearts and prayers go out to all those affected by this terrible natural disaster. We also must remember that Puerto Rico continues to recover from the devastating effects caused by Hurricanes Irma and Maria in September 2017, which affected the infrastructure, health services, education, energy and telecommunications networks on the island,” said The Most Reverend Nicholas DiMarzio, Bishop of Brooklyn.

“I ask the Lord to extend His blessings upon our brothers and sisters in Puerto Rico during this difficult time. I also thank the faithful people of Brooklyn and Queens for their continued compassion,” concluded Bishop DiMarzio.

The money collected will be sent by the Diocese of Brooklyn for distribution and direct assistance to the Archdiocese of San Juan in Puerto Rico. If someone wishes to write a check for the collection, it should be made payable to the Compostela Fund. For those who wish to mail a donation, it can be sent to: Compostela Fund c/o Diocesan Finance Office, 310 Prospect Park West, Brooklyn, NY 11215. Please write Puerto Rico in the check’s memo section.

Currents News, which airs weeknights on New York’s Catholic station NET TV, will launch a special series on human trafficking tomorrow, Thursday, January 16, titled “Human Trafficking Exposed” during the news program. The five-part series will examine the silent epidemic unfolding in every corner of the United States and across the globe, which Pope Francis has dubbed modern-day slavery.

The series includes in-depth reporting from the streets of New York, a major epicenter for human trafficking predators. The series will include exclusive interviews with mothers, daughters, and some of society’s most vulnerable victims exploited and abused for profit. Law enforcement experts, Catholic and other religious organizations, and survivors will reveal shocking truths and how they are combatting the crisis.

The schedule for the “Human Trafficking Exposed” series is as follows:

February 13: Part 5 – Getting Your Voice Back

Currents News airs weeknights at 7 pm EST on NET-TV in the New York City area on Spectrum (Channel 97), Optimum (Channel 30), and FIOS (Channel 48). Viewers can also tune in online at www.currentsny.tv. Currents News is produced by the DeSales Media Group.

Brooklyn – The Roman Catholic Diocese of Brooklyn is releasing the video of a heinous act of religious intolerance which occurred this past weekend, on Sunday, January 12, 2020, during the 9:30 a.m. Mass at St. Anthony of Padua, located at 862 Manhattan Avenue in the Greenpoint section of Brooklyn.

The attached video shows a man walking onto the church altar as Father Jossy Vattothu is celebrating the Mass. The perpetrator poured juice on the altar, desecrating the altar and interrupting the Mass. He also tossed some juice at the priest, staining his garments. The NYPD’s 94th Precinct responded quickly and the suspect, who was detained by church attendees, was arrested.

“During my years as a priest, nothing like this has ever happened. At first, as he approached the altar, I thought he had something to tell me. It is a miracle that the bread and wine were not damaged, and I was able to continue the Mass, consecrating the bread and wine into the body and blood of Jesus Christ,” said Father Jossy Vattothu.

“It’s really egregious that somebody would do that at the most sacred part of the Catholic Mass, which is the consecration. I think right now, people are scared given the current environment of anti-Semitic and anti-Catholic incidents. People are afraid to go to their house of worship,” said Monsignor Anthony Hernandez, Chancellor of the Diocese of Brooklyn.

“I pray for this person and do not know what was going through his mind. I am grateful for the parishioners who were so caring and consoled me after Mass.  I would urge Catholics who attend mass to sit closer to the altar so that we as a faith community can be more together and make the priest feel more comfortable,” continued Father Vattothu.

Father Jossy Vattothu recently celebrated his 10th year as a priest. He is a priest of the religious order of the Carmelites of Mary Immaculate assigned to the Diocese of Brooklyn.

The Diocese of Brooklyn regrets to announce the passing of Father Joseph Gancila, a priest in active ministry, currently serving as a parochial vicar at Our Lady of Guadalupe Church in Dyker Heights. Father Gancila died on Monday, January 6 at the age of 50.

A vigil mass will be offered tonight, Wednesday, January 8, 2020, at 7:30 p.m. at Our Lady of Guadalupe Roman Catholic Church, located at 7201-15th Avenue in Brooklyn. The Most Reverend Nicholas DiMarzio, Bishop of Brooklyn, will be the main celebrant of the mass.

Father Joseph A. Gancila was born in Brooklyn and attended the parish school at Regina Pacis and Xaverian High School. Father Gancila was ordained a priest of the Diocese of Brooklyn on June 2, 2001. In addition to his most current assignment, throughout his career, he served as a parochial vicar at St. Mary Mother of Jesus in Bensonhurst; Sacred Heart in Glendale; Our Lady of Angels in Bay Ridge; and St. Bernadette in Dyker Heights.

Father Gancila is survived by his parents, his sisters and several nieces and nephews.

on stabbing attack at rabbi’s home

Our hearts go out to the victims in last night’s horrifying stabbing attack inside the home of a rabbi in Monsey, New York.

This past week, which should have been a holy celebration of lights, has been marked with tragedy and violence against our Jewish brothers and sisters. We also remember the recent attacks at a Jersey City kosher market that left three dead.

The Catholic community of Brooklyn and Queens stands with members of all faiths in condemning these anti-Semitic attacks against people of faith. Hate like this has no place in a civil society.

Today we are reminded it is better to light one candle than to curse the darkness. Let us be that light as we pray for peace and practice tolerance today and always.

The Most Reverend Nicholas DiMarzio, Bishop of Brooklyn, in partnership with Timothy Cardinal Dolan of the Archdiocese of New York, is reminding all New York Catholics that tomorrow, December 16th, the Monday before Christmas, is Reconciliation Monday.

Reconciliation Monday also allows the faithful to confess their sins in anonymity. “One of the advantages is that you do not have to go to your own parish, as you can go to another Church and be unknown if there is some embarrassment in knowing the priest who will hear your confession. This is the time when the priest is merely an instrument of God’s grace and that the real absolver is Jesus Christ, Himself,” said Bishop DiMarzio.

To find a parish near you in Brooklyn or Queens, go to dioceseofbrooklyn.org/parishes/locator

The Diocese of Brooklyn officially marked the Feast of Our Lady of Guadalupe this afternoon at the Co-Cathedral of St. Joseph, located at 856 Pacific Street, in the Prospect Heights section of Brooklyn, followed by the traditional torch walk to 39 Catholic Churches throughout Brooklyn and Queens.

At noon, the Mass was celebrated in Spanish by the Most Reverend Nicholas DiMarzio, Bishop of Brooklyn, and concelebrated by Auxiliary Bishop Octavio Cisneros and more than 20 priests. Following Mass, Bishop DiMarzio blessed and lit 39 torches of the faithful.

More than 2,000 participants attended Mass and took part in pilgrimages to participating parishes throughout Brooklyn and Queens. The group of Catholics in attendance was representative of the Mexican-Catholic population of Brooklyn and Queens. There are more than 175,000 Mexicans living in the Diocese of Brooklyn. This event was organized by Reverend Jorge Ortiz-Garay, Director of the Mexican Apostolate. 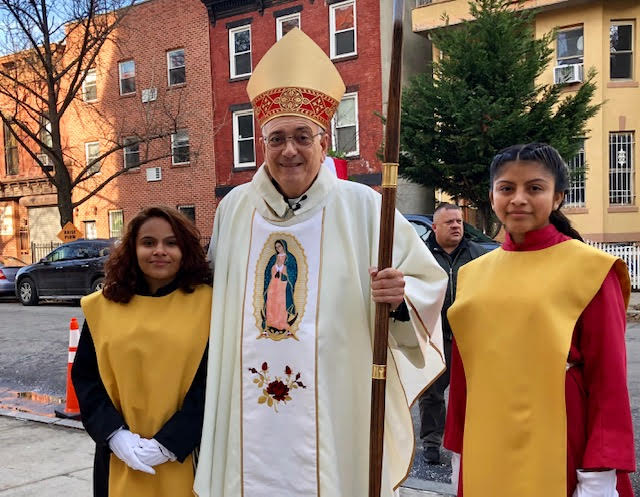 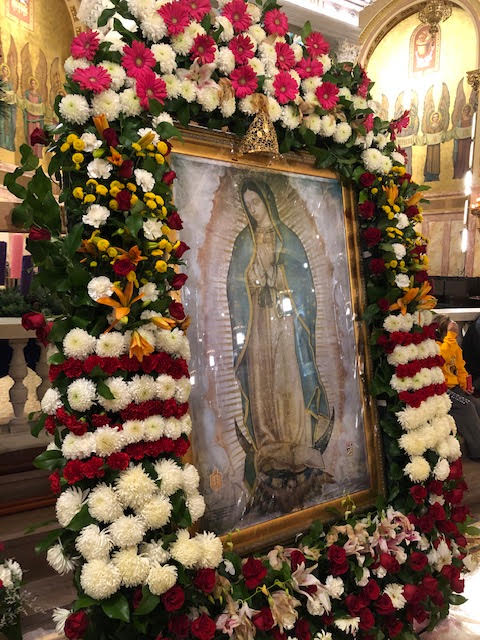 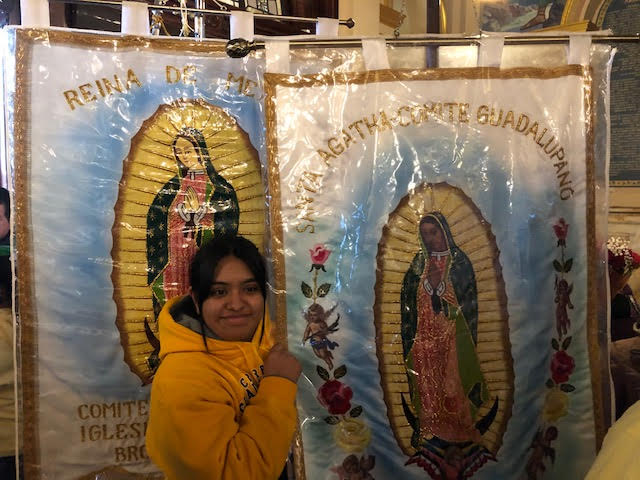 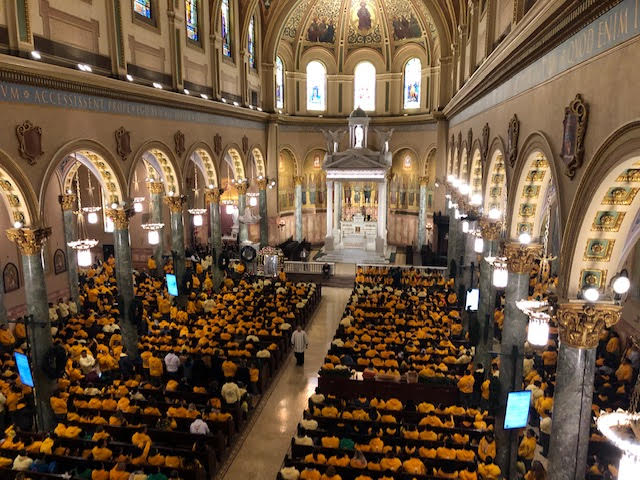 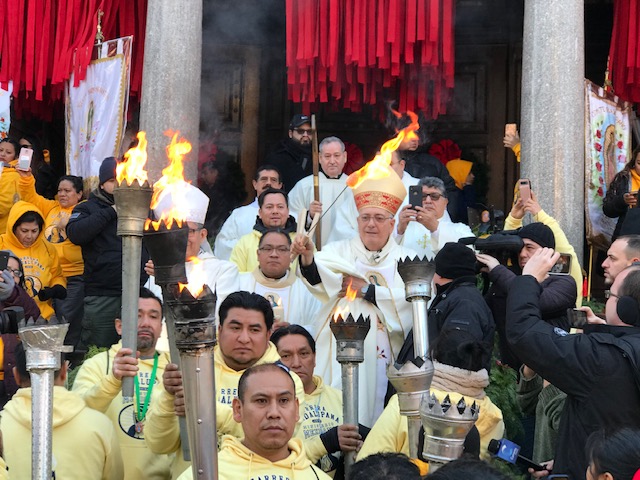 17,000 RED LIGHTS TO SHINE ON GRAND ARMY PLAZA CHRISTMAS TREE TO BRING AWARENESS TO THE PERSECUTION OF CHRISTIANS

The DeSales Media Group, along with the Diocese of Brooklyn and Aid to the Church in Need, will officially light the 2019 Diocesan Christmas tree at a ceremony tomorrow, Thursday, December 5, 2019, at 5 p.m., in front of the Soldiers and Sailors Memorial Arch located at 20 Grand Army Plaza in Brooklyn.

The ceremony will include spiritual reflection and song, a candle lighting vigil and moment of silence, and a special performance by the St. Saviour’s High School Gospel Choir.

The 32-foot Christmas tree has been decorated in approximately 17,000 red lights and 2,500 red bows to honor the memory of Christians who have been victimized for their beliefs.

According to Open Doors USA, in the top 50 World Watch List countries alone, 245 million Christians experience high levels of persecution for their choice to follow Christ. That is 1 in 9 Christians who are suffering for their beliefs.

Members of the media are welcome to attend. 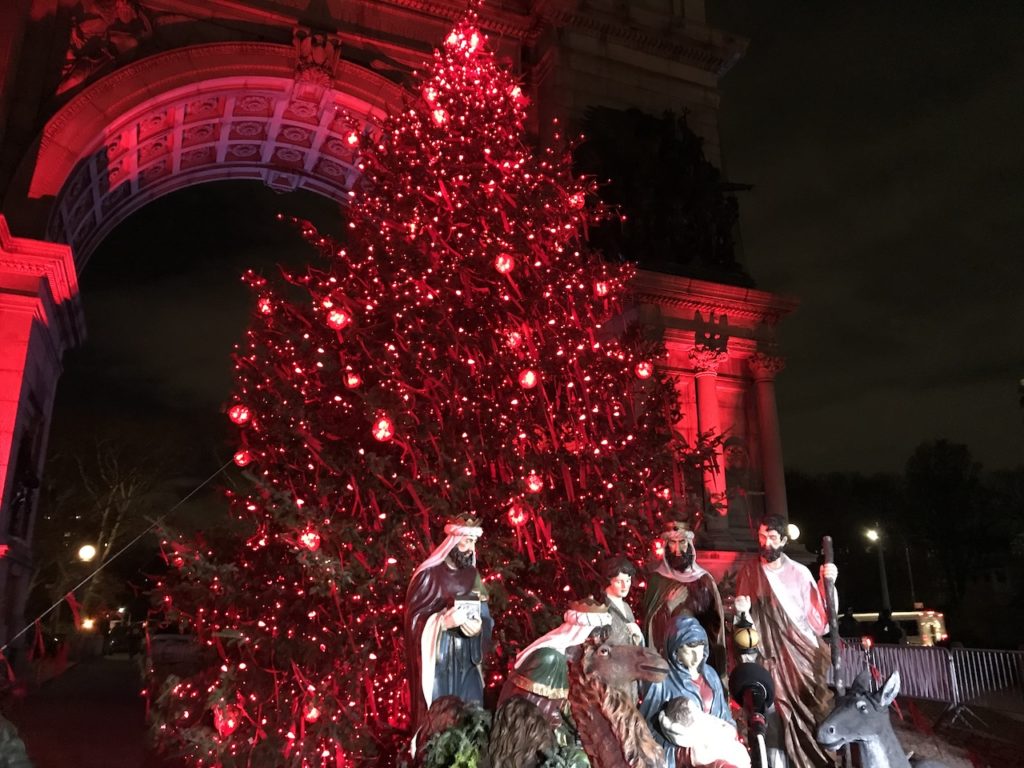 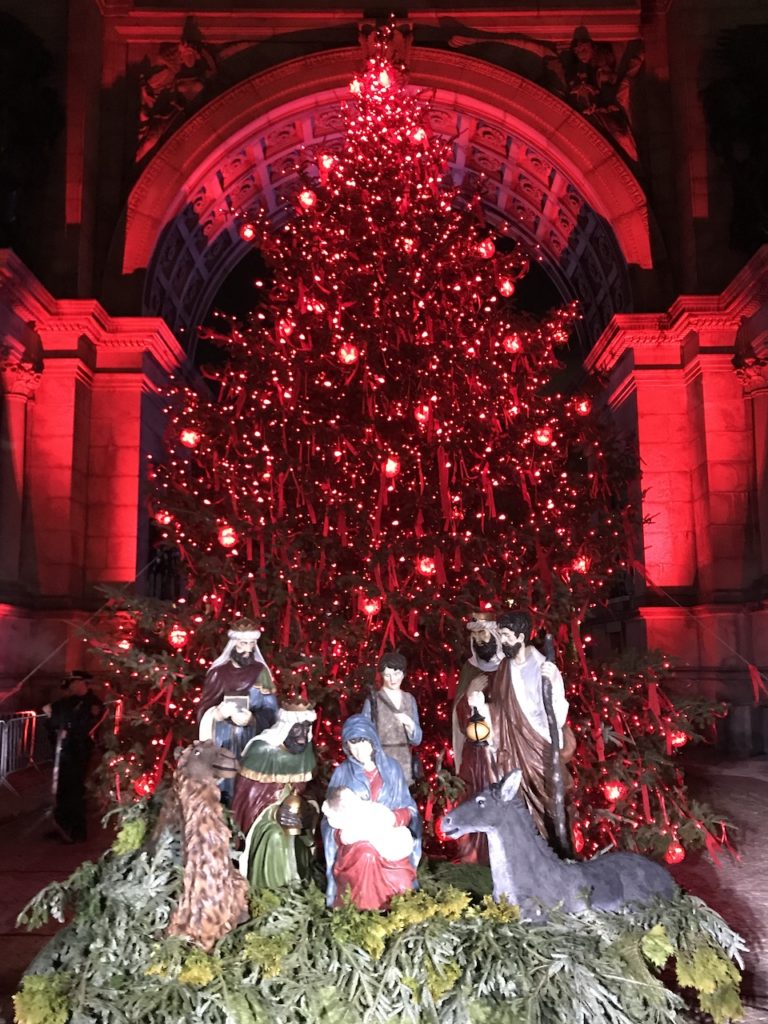 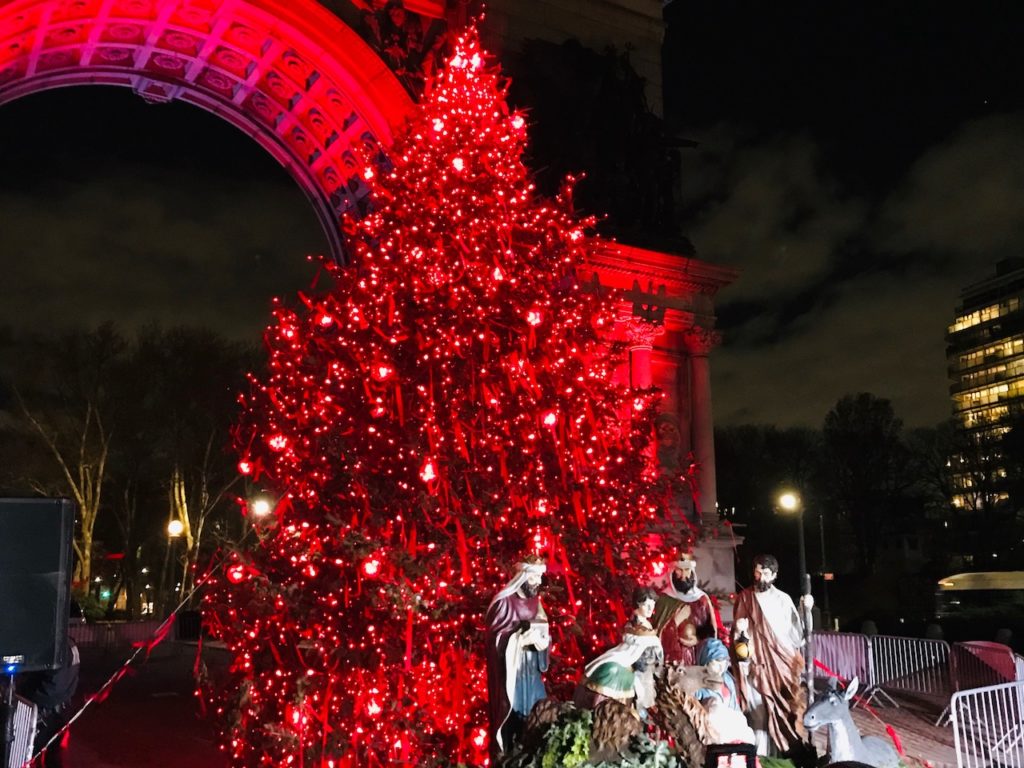 The Catholic Committee on Scouting of the Diocese of Brooklyn and Queens hosted the Peace Light Arrival Ceremony & First Transfer in the USA at Our Lady of the Skies Chapel, located in Terminal 4 of JFK International Airport, this weekend. The Peace Light arrived on Austrian Airlines Flight #87.

The Peace Light was first brought to Ground Zero in New York in 2001 by Canadian Scouts. In 2002, DHL delivered the Peace Light as a gift from Belgian Scouts and Guides to the Boy Scouts of America in NY. In 2003 the light didn’t make it to the U.S., however, members of the Brooklyn Diocesan Scouting Committee had kept the 2002 Peace Light burning and spread that around the diocese. Since then, Austrian Airlines has continued to bring the Peace Light to the United States each year since.

The Peace Light flies from Vienna in two explosion-proof, British mining lamps, fueled by smokeless paraffin oil. Representatives from many Boy Scout and Girl Scout councils from across the tri-state area and the country were on hand for the service. The candles lit by the Peace Candle will now be brought to houses of worship, hospital, senior citizen homes, homeless shelters, prisons, and other locations in many different cities and towns.

Each year, a Scout from Upper Austria fetches the light from the grotto in Bethlehem where Jesus was born. The light is then flown to Austria and from there it is distributed at a Service of Dedication to delegations who take it back, with a message of peace, to their own countries for use at ecumenical services. 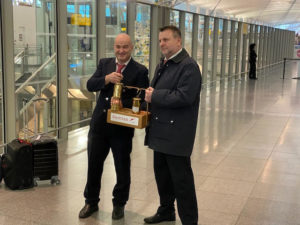 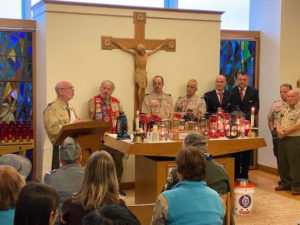 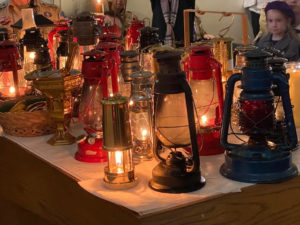 The Diocese of Brooklyn has announced details of the 2019 Spirit of Christmas Concert, benefitting the Futures in Education scholarship fund, will feature the Irish Tenors, Ronan Tynan, Declan Kelly, and Anthony Kearns.

The concert will take place on Tuesday, December 17, at 8 p.m., in the Howard Gilman Opera House at the Brooklyn Academy of Music, located at 30 Lafayette Avenue in Fort Greene.

For more information on the event, and to purchase tickets, please call 718-965-7934 or visit https://futuresineducation.org/events/spiritofchristmas/

A photo of the Irish Tenors is attached. 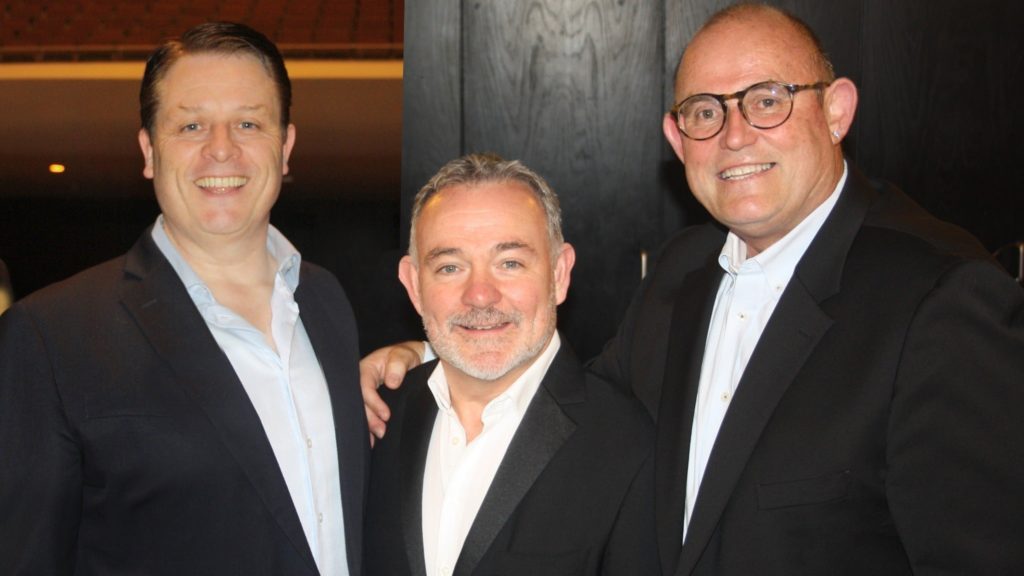