Canonization efforts are underway for Bishop Francis Xavier Ford and Msgr. Bernard Quinn, two great men who are major figures in the history of the Diocese of Brooklyn. Learn more about them here. 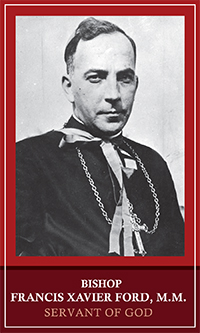 In December of 2017, Bishop Nicholas DiMarzio formally announced the opening of the cause for canonization for Bishop Francis X. Ford.

Through his life and mission work, Ford demonstrated the simple ability to love and value other cultures. He was the first Maryknoll seminarian and one of three Maryknoll priests, along with co-founder Father Thomas F. Price, who were sent on the first overseas mission for the U.S. church. They departed for China on September 8, 1918.

He worked for decades in China, but the establishment of political factions and the presence of violence there created an uneasy way of life. When the communists seized power, he was arrested and interrogated, and he died as a martyr in a prison camp in 1952. 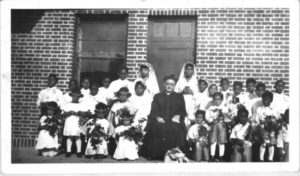 Bernard Quinn was born in Newark on January 15, 1888, on the same day that Pope Leo XIII canonized Peter Claver. After serving as an Army chaplain in World War I, Fr. Quinn was granted permission to begin an apostolate to black Catholics.

In 1922, he bought what was formerly a Protestant church; the building was blessed and dedicated to St. Peter Claver on February 26, 1922. Fr. Quinn would later go on to found Little Flower Children Services, which cared for the increasing number of black children orphaned as a result of the Great Depression.

Situated in Wading River, Long Island, Fr. Quinn and his collaborators heroically opposed the Ku Klux Klan, who in two separate attacks had burned the orphanage to the ground. After a lifetime of fighting for racial equality, he died in 1940 at the age of 52. Learn more at fatherquinn.org and in this article from The New York Times.