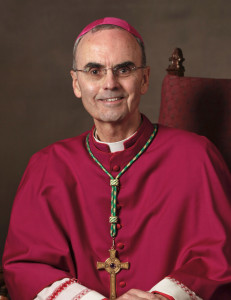 The Most Reverend Paul Sanchez was born November 26, 1946, in Brooklyn. He earned a Bachelor of Arts from St. Bonaventure’s University, a Master of Arts from the University of Notre Dame and a Licentiate of Sacred Theology from the Pontifical Gregorian University in Rome.

Then-Father Sanchez was named vicariate coordinator for the diocesan Liturgical Commission in January 1975. He served as a member of the Presbyteral Council, January 1984; member of the diocesan team for Ministry to Priests, January 1985; member, International Committee on English in the Liturgy sub-committee, January 1978 to January 1979. A passionate teacher, he was an adjunct faculty member at Saint John’s University and the Seminary of the Immaculate Conception in Huntington, New York.

“I have been a priest for forty years and have been privileged to see how Almighty God has used me, despite my many failings and weaknesses, to build up the kingdom of Heaven. I am deeply grateful to the Holy Father for his confidence and trust in choosing me to share in the life of the apostles of our Lord,” said Bishop Sanchez. “I have loved my ministry as a parish priest in my first three wonderful parishes and then as pastor of the people of St. Agatha in Sunset Park and Our Lady of Mount Carmel in Astoria. Even when the people had limited financial resources, they were rich in faith and an inspiration to my life of faith. Moreover, when serving as the Territorial Vicar of Queens, I have been able to work closely with the pastors, priests and staff of our parishes. As I have walked on this great pilgrimage as a priest, the depths of God’s love have been made very clearly manifest.”

Bishop Sanchez was named a Prelate of Honor by Blessed John Paul II in 1997. He speaks English and Spanish. Bishop Sanchez is currently serving as the Pastor of Our Lady Queen of Martyrs Parish in Forest Hills, Queens.