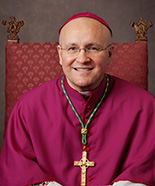 The Most Reverend James Massa was born in Jersey City, New Jersey, to the late Andrew and Irene Gilbert Massa. He attended Boston College and graduated with a Bachelor’s in Theology and History in 1982. In 1985, he earned a Master’s of Divinity Degree from Yale University, and in 1997, a Ph.D. in Systematic Theology from Fordham University, where he wrote his dissertation under the late Cardinal Avery Dulles.

The late Bishop Francis J. Mugavero ordained Father Massa a priest of the Diocese of Brooklyn on October 25, 1986. His first assignment was as a Parochial Vicar at Our Lady Queen of Martyrs in the Forest Hills section of Queens (1986-1990). He went on to serve as Campus Minister at Queens College (1990-1993) and in a number of positions at seminaries and universities as an Associate Professor of Theology. In 2005, he was appointed the Executive Director of the United States Conference of Catholic Bishop’s Secretariat for Ecumenical and Interreligious Dialogue. In 2008, he was appointed by Pope Benedict XVI a Consultor to the Pontifical Council for Interreligious Dialogue and a Member of the Joint Working Group between the Holy See and the World Council of Churches.

“I receive this news of my appointment with gratitude to the Holy Father, who exemplifies in all he does ‘the joy of the Gospel,’” said the then Bishop-Elect Massa at the time of his appointment. “Aware of my own inadequacies and fears, I place all my confidence in Jesus, whose love never fails us on the journey of faith.”