Live from the Co-Cathedral of St. Joseph in Brooklyn

Bishop-elect Kevin Sweeney, appointed last week by Pope Francis to be the 8th Bishop of the Diocese of Paterson, will celebrate the English Mass tomorrow, Sunday, April 26, 2020, at 11 a.m. live from the Co-Cathedral of St. Joseph in the Prospect Heights section of Brooklyn.

The Mass can be viewed on NET-TV, the cable channel of the Diocese of Brooklyn. NET-TV can be seen in the New York City area on Spectrum-channel 97, Optimum-channel 30, and FIOS by Verizon-channel 48.

WHAT:  Catholic Charities Brooklyn and Queens to host a Pop-Up Food Distribution in East New York at St. Michael – St. Malachy Parish located at 225 Jerome Street, Brooklyn, NY 11207 on Friday, April 24th from 10:30 a.m. to 1:00 p.m. while supplies last for neighbors in need impacted by the COVID-19 pandemic.

Catholic Charities Brooklyn and Queens will provide families and individuals with bags of food and will also provide access to additional assistance, information, and resources, including outreach material encouraging an already undercounted neighborhood to participate and self-respond to the 2020 Census. 60 percent of the COVID-19 cases in New York City are in the boroughs of Brooklyn and Queens.

Last week, Catholic Charities Brooklyn and Queens distributed nearly 12,000 meals worth of food at a grab-and-go style event in Corona, Queens which has been one of the hardest-hit communities during this crisis, and families are in dire need of essentials.

Catholic Charities Brooklyn and Queens is responding to the hardworking families in this and other immigrant neighborhoods by providing pop-up food pantries, access to supportive services via our call center, and behavioral health services via telehealth. 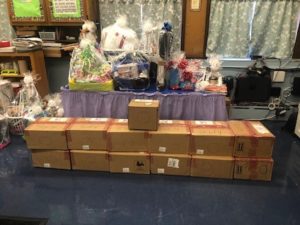 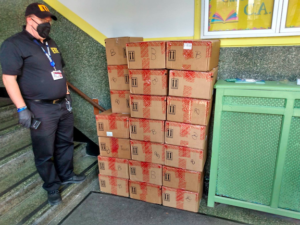 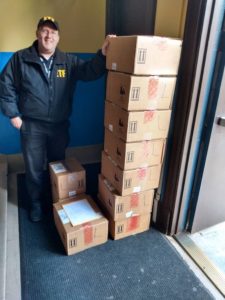 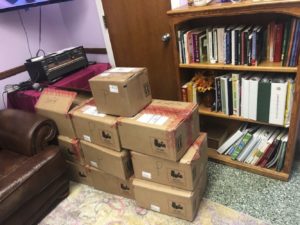 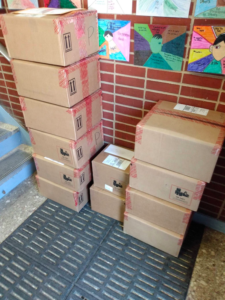 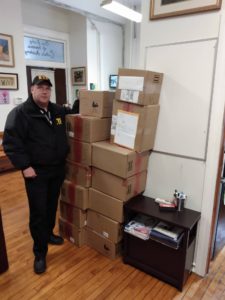 The Emergency Task Force of the Diocese of Brooklyn continues to work in partnership with DeSales Media Group to advance the presence of individualized technology for the students of the Catholic schools throughout Brooklyn and Queens.

During last week’s Easter recess, members of the task force were instrumental in delivering nearly 500 iPads for the students at six Catholic academies including St. Patrick’s, Our Lady of Perpetual Help (Brooklyn), St. Brigid-St. Frances Cabrini, St. Peter’s, Our Lady of Sorrows, and St. Leo’s. DeSales Media Group has now distributed more than 10,000 iPads and Chromebooks across the Diocese of Brooklyn’s school system.

“Long before Brooklyn and Queens became the epicenter of the Coronavirus pandemic, DeSales Media was visionary in our partnership with many of the schools throughout the Diocese, incorporating first-rate technology into the first-rate curriculum,” said Monsignor Kieran E. Harrington, Vicar for Communications for the Diocese of Brooklyn, and Chairman and President of the DeSales Media Group.

“Since the first day we had to shut down our school system, many of our students were already equipped to transition to distance learning. As COVID-19 continues to keep our schools closed, additional schools in our network have reached out to DeSales to help remotely educate their students. We are proud to answer these calls and are grateful to the Diocese’s Emergency Task Force for their commitment to getting this technology to the students.”

“It is an honor to be part of getting this vital equipment to some of the families that need it the most,” said Vincent LeVien, Director of the Brooklyn Diocese’s Emergency Task Force.

Photos of the recent deliveries of Chromebooks are attached.

Catholic Charities Brooklyn and Queens today hosted a Pop-Up Food Distribution event at St. Michael – St. Malachy Parish located at 225 Jerome Street in the East New York section of Brooklyn, for individuals and families impacted by the COVID-19 pandemic. Members of the Diocese of Brooklyn’s Emergency Task Force were also present, giving out masks and gloves to people waiting on line.

Photos from today’s event are attached.

Video of today’s event can be found at the Diocese of Brooklyn’s Vimeo page: 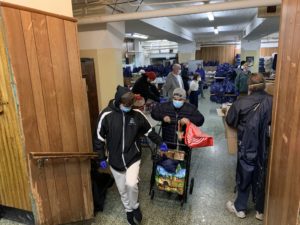 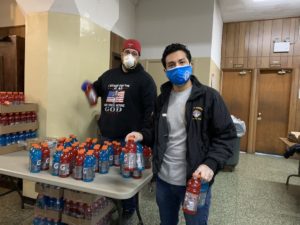 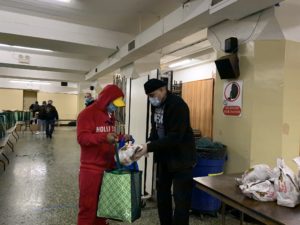 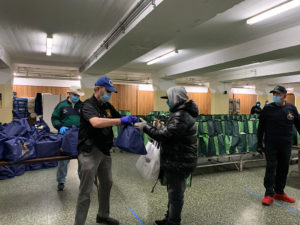 The success of last week’s grab-and-go style event is proof the community is in dire need of essentials. Catholic Charities provided 1,000 families and individuals bags of food that will feed a family of three for three days. Catholic Charities also provided access to additional assistance, information, and resources, including outreach material encouraging an already undercounted neighborhood to participate and self-respond to the 2020 Census. 60 percent of the COVID-19 cases in New York City are in the boroughs of Brooklyn and Queens.

Catholic Charities Brooklyn and Queens has been responding to the hardworking families in this primarily immigrant neighborhood by providing pop-up food pantries, access to supportive services via our call center and behavioral health services via telehealth.

The success of last week’s grab-and-go style event is proof the community is in dire need of essentials. Catholic Charities provided 1,000 families and individuals bags of food that will feed a family of three for three days. Catholic Charities also provided access to additional assistance, information, and resources, including outreach material encouraging an already undercounted neighborhood to participate and self-respond to the 2020 Census. 60 percent of the COVID-19 cases in New York City are in the boroughs of Brooklyn and Queens.

Catholic Charities Brooklyn and Queens has been responding to the hardworking families in this primarily immigrant neighborhood by providing pop-up food pantries, access to supportive services via our call center and behavioral health services via telehealth.

Brooklyn, N.Y. (April 15, 2020) Pope Francis today announced he has named Reverend Kevin Sweeney, Pastor of St. Michael’s Catholic Church in Sunset Park, the 8th Bishop of the Catholic Diocese of Paterson, New Jersey. Bishop-elect Sweeney will succeed retiring Bishop Arthur Serratelli, whose resignation was accepted today by the Holy Father. Bishop-elect Sweeney, who is 50 years old, is expected to begin his ministry in the Diocese of Paterson later this year.

“I congratulate Bishop-elect Kevin Sweeney for his appointment by the Holy Father to serve Catholics in the Paterson Diocese,” said the Most Reverend Nicholas DiMarzio, Bishop of Brooklyn. “I could not think of a better choice. Bishop-elect Sweeney has served the Diocese of Brooklyn for 22 years and is an outstanding example of a parish priest. I know he is a man of prayer and is a zealous advocate of vocations to the priesthood.”

Bishop-elect Sweeney, a native of Queens, New York, was born on January 10, 1970, to the late James and Agnes (nee Blewitt) Sweeney. He has a sister, Marie Shanahan, a brother-in-law Kevin, a brother, Brendan, a sister-in-law Tara, and five nieces and nephews. Bishop-elect Sweeney grew up in St. Luke’s parish in Whitestone.

He attended Cathedral Prep from 1984-1988 and was a star on the high school seminary’s baseball team, excelling as an infielder, outfielder, and pitcher. While his dream of playing professional baseball never materialized, he was inducted into the school’s Hall of Fame in 2013.

After high school graduation, Bishop-elect Sweeney entered the Cathedral Seminary House of Formation in Douglaston and studied at St. John’s University, where he earned a Bachelor of Arts in Philosophy in 1992. He then entered the Seminary of the Immaculate Conception in Huntington and was awarded a Master of Divinity in Theology. During his time at the Seminary in Huntington, Bishop-elect Sweeney spent a Pastoral Year at St. Agatha’s in Brooklyn.

On June 28, 1997, Bishop-elect Sweeney was ordained a priest of the Diocese of Brooklyn by the late Bishop Thomas Daily. Bishop-elect Sweeney’s first assignment as Parochial Vicar was to the parish of St. Nicholas of Tolentine in Jamaica from 1997-2003. He was then assigned to Our Lady of Sorrows in Corona from 2003-2004.

In 2004, Bishop DiMarzio named Bishop-elect Sweeney the Vocations Director for the Diocese of Brooklyn, a position he held until 2010. During this time, he also served as the first Director of the (St.) Pope John Paul II House of Discernment.

In January 2010, Bishop-elect Sweeney was appointed to his current assignment, as the Pastor of St. Michael’s Parish in Sunset Park, Brooklyn. Bishop-elect Sweeney is fluent in Spanish, having studied the language extensively in programs in the Dominican Republic and Costa Rica.

“This is a proud day for the Diocese of Brooklyn that the Holy Father would have chosen one of our priests to be a Bishop in our tri-state area,” said DiMarzio.

Bishop-elect Sweeney will be available for a remote zoom press conference at 10:30 a.m. Only those whose name is clearly stated in their zoom id and the news outlet they are affiliated with will be admitted. 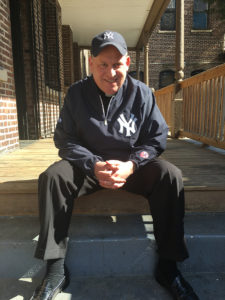 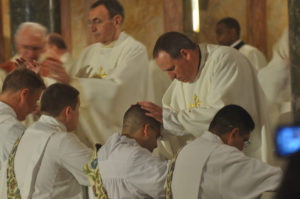 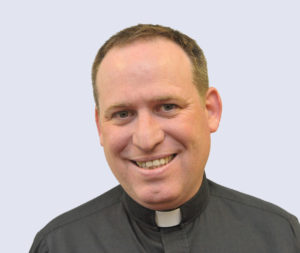 Today the Most Reverend Nicholas DiMarzio, Bishop of Brooklyn, learned of condolences from Pope Francis over the death of two priests serving the Diocese of Brooklyn due to coronavirus.

Timothy Cardinal Dolan, New York’s Archbishop, was speaking to Pope Francis earlier today, and during that conversation, the Holy Father asked the Cardinal to express his condolences to Bishop DiMarzio, the families of the two priests, and the people of the Diocese of Brooklyn over the loss of their two beloved priests.

Pope Francis was referring to Father Jorge Ortiz-Garay, who died on March 27, 2020, and Father Gioacchino Basile, who died on April 4, 2020.

“On behalf of the Diocese of Brooklyn, I am humbled to have received prayers and condolences from our Holy Father, Pope Francis, on the deaths of two of our priests who have been lost to coronavirus. As we continue to mourn the loss of Father Ortiz-Garay and Father Basile, it is comforting to know Pope Francis joins with us in solidarity. We are one church, and together the people of God will get through these most difficult times,” said Bishop DiMarzio. 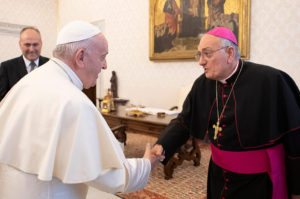 Attached is a photo of Pope Francis greeting Bishop Nicholas A. DiMarzio of Brooklyn, N.Y., during a meeting with bishops from the state of New York in the Apostolic Palace at the Vatican Nov. 15, 2019. The bishops were making their “ad limina” visits to the Vatican to report on the status of their dioceses to the pope and Vatican officials

Father Josephjude Gannon, Pastor of St. Gerard Majella located in the Hollis section of Queens, joined members of the 103rd Precinct to offer a special blessing on Easter Sunday morning.

Father Gannon was invited to speak and bless the rank and file, as well as the precinct stationhouse, at the first roll call which took place at 6:30 a.m. yesterday, Sunday, April 12, 2020.

The 103rd Precinct is located at 168-02 91st Avenue in the Jamaica section of Queens and serves a western portion of Queens, including the neighborhoods of Hollis Park Gardens, Hollis, Lakewood, and Jamaica, as well as the Jamaica Business District.

The Diocese of Brooklyn today is releasing photos from a socially distant Easter egg hunt, organized by the parents and teachers at Our Lady of the Blessed Sacrament Catholic Academy, located in the Bayside section of Queens.

This week, Our Lady of the Blessed Sacrament Catholic Academy invited students and families to decorate paper Easter eggs and display them on their home front door or window. They have been encouraging students and families, who are taking walks in the neighborhood, to keep track of how many eggs they find.

The school community has been using the hashtag #OLBSPROUD to post the pictures of the Easter eggs that have been found.

Easter egg hunt photos, courtesy of Our Lady of the Blessed Sacrament Catholic Academy, are attached.