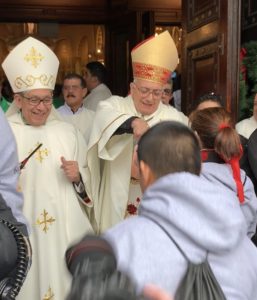 Today the Diocese of Brooklyn celebrated the feast of Our Lady of Guadalupe at the Co-Cathedral of St. Joseph, 856 Pacific Street, in Prospect Heights, followed by the traditional torch walk to 35 Catholic Churches throughout Brooklyn and Queens.

The day’s events began at 10:30 a.m. with Catechesis. At noon, Mass was celebrated in Spanish by the Most Reverend Nicholas DiMarzio, Bishop of Brooklyn, and concelebrated by 20 priests as well as auxiliary Bishop Octavio Cisneros, who delivered the homily.

Following Mass, Bishop DiMarzio blessed and lit about 35 torches of the faithful. After that, more than 2,000 participants departed for their pilgrimage to participating parishes throughout Brooklyn and Queens. There are five routes; three will end in Queens, and two will terminate in Brooklyn.

Attached are pictures of the colorful celebration. If you need higher resolution images or a video clip, contact Adriana Rodriguez at (646) 241-9805 or at arodriguez@desalesmedia.org.