CAUSE FOR SAINTHOOD OF BROOKLYN PRIEST, A CHAMPION FOR RACIAL EQUALITY, ON THE WAY TO THE VATICAN

The Diocese of Brooklyn is announcing the findings of the Diocesan investigation regarding the Cause for Canonization of Monsignor Bernard John Quinn have been officially accepted by the Most Reverend Nicholas DiMarzio, Bishop of Brooklyn.

The documentation was presented to Bishop DiMarzio at a private vespers service held at the Immaculate Conception Center in Douglaston earlier this week. The collected information will now be sent to the Vatican’s Congregation for the Causes of Saints in support of the cause of sainthood for Monsignor Bernard Quinn.

From an early age, Bernard Quinn became conscious of the great injustices African-Americans suffered and lived his life as a champion for racial equality. Bernard Quinn was ordained to the priesthood in the Diocese of Brooklyn in 1912, and ten years later, with Diocesan support, he established the first church for African American Catholics in Brooklyn. Monsignor Quinn founded St. Peter Claver Roman Catholic Church in Bedford Stuyvesant.

In 1928, Monsignor Quinn established the first orphanage for African American children in Wading River on Long Island. Despite the building being set on fire twice, Monsignor Quinn rebuilt it a third time; this time fireproofing it, by using concrete and brick. The building, known at the time as the Little Flower Orphanage, remains the operations base for Little Flower Children and Family Services of New York.

“Our investigation took almost ten years to put together and now we can send the documentation we have on the life of Monsignor Quinn to Rome.  He combatted racism and is an inspiration to the priests of this diocese.  He is a hero who turned things around and gave his life for his people, died an early death, and was a great man,” said The Most Reverend Nicholas DiMarzio, Bishop of Brooklyn.

Mary Clare Quinn, the great-niece of Monsignor Quinn who attended the service, recalled “They always called him the Monsignor but he liked to be called Father. The family was all very proud of the work he was doing at Little Flower, and we all contributed during the winters and summers, going out there to help. They used to burn crosses at our house in Mineola, even after he was gone, but my family stared fear down.”

Monsignor Paul Jervis, who published a book in 2005 entitled “Quintessential Priest: The Life of Father Bernard J. Quinn,” and who is the Postulator for the Cause said, “Monsignor Quinn could not separate his sacramental ministry from the social and political realities that denied to people on account of their race, or immigrant status, the opportunities to enjoy the fullness of life as the Lord willed for all humanity.”

“St. Peter Claver Catholic Church became a meeting ground where white Catholics encountered blacks and discovered that they all had a common humanity with the same human problems, and were all in need of the intercession of St. Therese and the pastoral intercession of Monsignor Quinn,” concluded Monsignor Jervis.

Photo #1- Photo of Monsignor Bernard Quinn displayed on the altar at the prayer service at the Immaculate Conception Center.

Photo #2- Monsignor Paul Jervis, the author of “Quintessential Priest: The Life of Father Bernard J. Quinn,” speaks in support of Monsignor Quinn’s cause for sainthood. 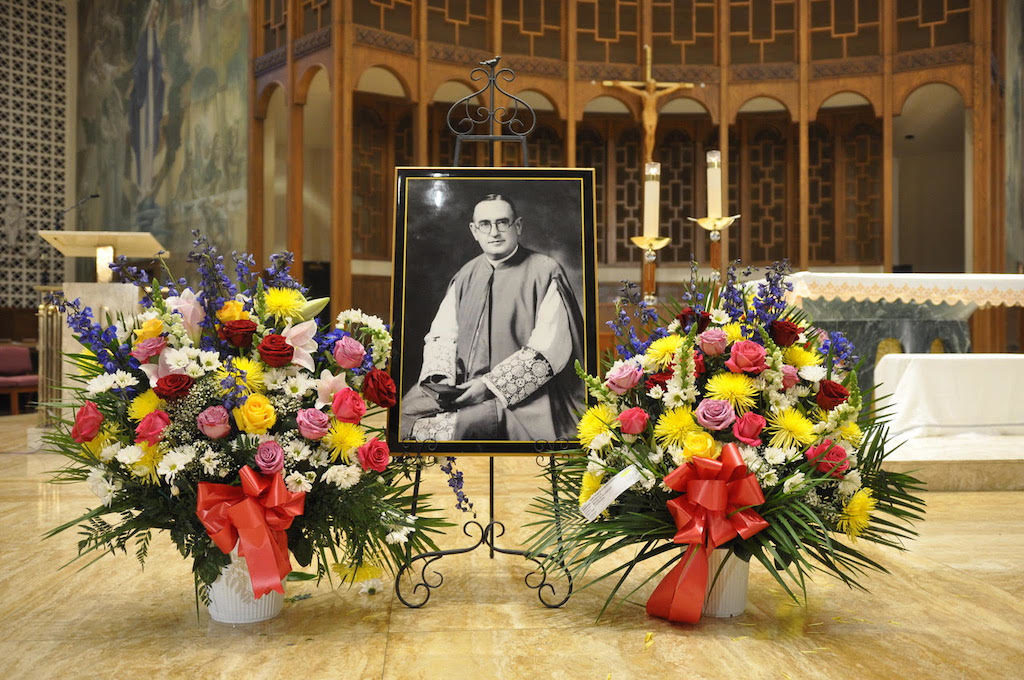 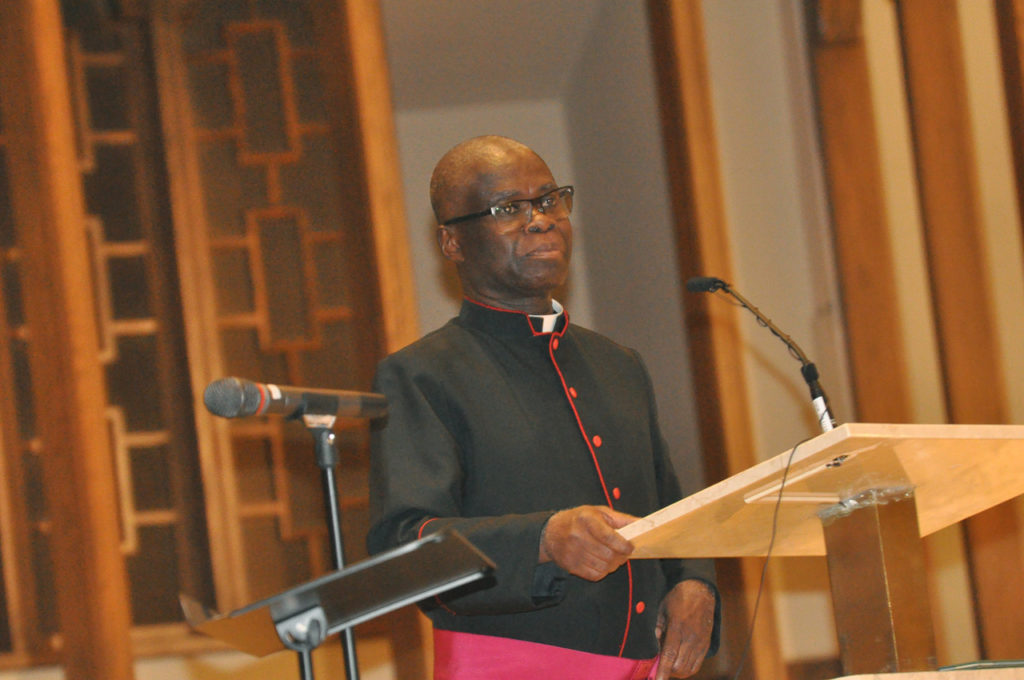