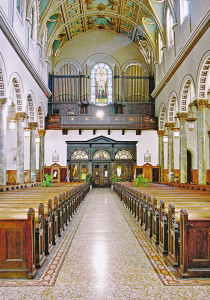 Bishop Nicholas DiMarzio will dedicate the church and consecrate the altar of the Co-Cathedral of St. Joseph, 856 Pacific Street in Prospect Heights, on Tuesday evening, May 13, at 7:30 p.m. The liturgy will be broadcast live on NET TV, the diocese’s 24-hour cable television channel.

The church was designated as a Co-Cathedral for the Diocese of Brooklyn on Feb. 14, 2013 by Pope Benedict XVI after Bishop DiMarzio petitioned the Vatican.

Construction of St. Joseph’s, located on Pacific St. between Vanderbilt and Underhill Avenues, was begun in 1912 in the Spanish Colonial style. It is the third church on that site and replaced the previous buildings that had been serving the large immigrant population that was moving into the city of Brooklyn. It was dedicated on May 3, 1914.

The church comfortably seats 1,500 people and served a congregation that at one time, according to parish records, swelled to 30,000 on any given Sunday.

The history of the parish traces itself to 1851, predating the establishment of the Diocese of Brooklyn in 1853. St. Joseph’s was the eighth parish to be established on Long Island. Its first pastor was Father Patrick J. O’Neill, who served there until 1867.

The church was designed by F. J. Berlenbach, a Brooklyn architect. It was built of glazed brick and terracotta. The Alexander F. Locke Decorative Co., a Brooklyn firm, was responsible for the design and execution of the stained glass windows. The altar and baldachino, as well as the pulpit and four side altars, were designed by Cav. Domenico Borgia.

In recent times, the neighborhood has felt the impact of significant demographic change. Gentrification has changed the face of the neighborhood and Forest City Ratner’s redevelopment of the Atlantic Yards, which includes the Barclay’s Center, will bring an estimated 16,000 new residents.

Just three years ago, average Mass attendance had dropped to 80-90 people and the buildings were in a state of disrepair. Today, more than 700 people attend Sunday Mass and collections have increased from $300 a week to $4,500.

“It would seem that a Catholic church ought to be part of this massive urban renewal project,” said Msgr. Kieran Harrington, pastor and rector of the Co-Cathedral. “The Church of St. Joseph is perfectly situated to meet that need.”

Six years ago, an extensive renovation of the exterior of the church began and the building underwent pointing. A new roof was installed and the windows, which are of museum quality, have been cleaned and restored. Shorter steeples were installed to replace those that were removed in the 1970’s because of structural damage. The bell was restored and hoisted into place in one of the steeples. The firm of Acheson and Doyle managed the renovation of the exterior and Botti Studios restored the windows.

Initially, the project was funded by a loan from the Diocese of Brooklyn, fundraising through the Office of Development, and a large foundation grant. Each of the language apostolates are also raising $25,000 to fund the placement of the images of their national Madonnas.

The total cost of the restoration was $18.5 million. The leveraging of the real estate interests of the parish is what enabled this work to move forward. The diocese and the Compostella Fund loaned the parish the money, and it is estimated that the entire sum will be paid back over ten years.

One of the features of the new Co-Cathedral is the addition of modern artwork depicting contemporary saints as well as a series of murals that represent 22 Marian images donated by the ethnic apostolates of Brooklyn and Queens, depicting their national Madonnas. It is also home to a recently restored grand Moller Organ of 36 ranks and over 2,000 pipes.

“The faces of the people in the pews of St. Joseph’s reflect the diversity of the many cultures that call the Diocese of Brooklyn home,” said Bishop DiMarzio. “It is only fitting that this parish, among the largest in Brooklyn and Queens, becomes our co-cathedral.”