The Diocese of Brooklyn is announcing that the New York City Police Department is investigating an act of vandalism that took place earlier this morning at Cathedral Prep School and Seminary located in the Elmhurst section of Queens as a possible hate crime.

According to video surveillance, at 3:09 a.m. today, Friday, July 10, 2020, an individual approached the statue of the Virgin Mary which stands at the entrance of Cathedral Prep and defaced it, writing the word “IDOL” on the statue’s front. The desecration was discovered around 7:30 a.m. this morning by staff.

This statue of the Blessed Mother has greeted the men of Cathedral Prep School and Seminary for over 100 years. The statue was originally at the school’s Brooklyn location and was brought to the Queens location when the two campuses merged in 1985. The statue has been cleaned through the efforts of Monsignor Michael Reid and Catholic Cemeteries of Brooklyn.

“Today, Cathedral Prep endured an act of hatred. We were victims of vandalism against a beloved statue that is dear to generations of Cathedral students. This image of our most Blessed Mother is approximately 100 years old and each day, both students and passersby pray fervently for her intercession in front of the statue. While just the day prior, a kind stranger placed a beautiful bouquet of flowers in her hands, last night she was defaced with hateful words,” said Father James Kuroly, Class of ’98, who is the Rector and President of Cathedral Prep.

“Obviously, this tragedy saddens us deeply but it also renews our hope and faith in the Lord as he has shown his goodness in the many people who have already reached out to us. We are sincerely grateful for the help we have received as well as the prayers. Please continue praying for those who committed this act of vandalism and hatred toward Our Lady and the Church. May Mary stand forever at the doors of Cathedral Prep greeting her sons,” continued Father Kuroly.

The high school at Cathedral Prep is committed to providing an environment that forms men for greatness including those considering God’s calling to the priesthood.

A copy of the surveillance footage of the incident can be found here: https://vimeo.com/437239539 and a photo of the statue is attached. 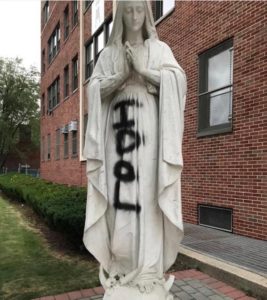