“It is with great pleasure that I am able to announce that Brooklyn Auxiliary Bishop James Massa has been chosen by the Borromeo Council, the governing body of our inter-diocesan seminary system consisting of Cardinal Timothy Dolan, Bishop John Barres and myself, to be the new Rector at St. Joseph’s Seminary, Dunwoodie,” said Bishop DiMarzio. The appointment was made with the approval of the Holy See.

“The greatest joy in my life has been working with dedicated teams of men and women in helping to form priests, permanent deacons and lay women and men for today’s Church,” said Bishop Massa.

Ordained a priest of the Diocese of Brooklyn on October 25, 1986, Father Massa served as a Parochial Vicar at Our Lady Queen of Martyrs in Forest Hills from 1986-1990, Campus Minister at Queens College from 1990-1993 and in a number of teaching positions at seminaries and universities. He was appointed the Executive Director of the United States Conference of Catholic Bishop’s Secretariat for Ecumenical and Interreligious Dialogue in 2005.

Father Massa returned to the Diocese of Brooklyn in 2011 to coordinate the merger of the programs at St. Joseph’s Seminary and the Seminary of the Immaculate Conception in Huntington, overseeing the formation of the new faculty and the accreditation of academic programs with the Middle States Association of Colleges and Schools (MSACS) and the Association of Theological Schools (ATS). In 2012 he joined the same faculty as a professor of theology and spiritual director.

Bishop Massa succeeds Monsignor Peter I. Vaccari, also of the Diocese of Brooklyn, who became Rector in 2011 after the seminaries of the three downstate New York dioceses merged.

“Bishop Massa is uniquely qualified to take up these responsibilities, as he was instrumental in putting together the three dioceses into this joint seminary system.  His seminary experience and love for learning will enable Bishop Massa to be a good mentor and director for the formation of our future priests in our three dioceses,” said Bishop DiMarzio.

In addition to seminarians from the Archdiocese of New York, Diocese of Brooklyn, and Diocese of Rockville Centre, Saint Joseph’s Seminary trains priesthood candidates for the Dioceses of Albany, Scranton, and Bridgeport, the Franciscan Friars of the Renewal, the Neo-Catechumenal Way, the Piarist Fathers and Brothers, and the Idente Missionaries. The seminary also sponsors degree programs for candidates for the permanent diaconate, as well as for lay women and men pursuing various ministries in the Church.

“Returning to Dunwoodie feels very much like coming home. I hope I can be part of an effort to make St Joseph’s Seminary a bridge that furthers good collaboration among the three downstate dioceses of New York State,” said Bishop Massa.

Bishop Massa attended Boston College and graduated with a Bachelor’s in Theology and History in 1982. In 1985, he earned a Master of Divinity Degree from Yale University, and in 1997, a Ph.D. in Systematic Theology from Fordham University, where he wrote his dissertation under the late Cardinal Avery Dulles. He will be the 22nd Rector of St. Joseph’s Seminary, one of five bishops who has served in this role. 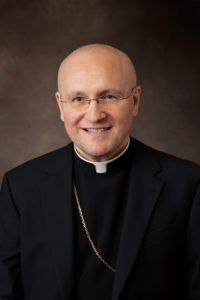