Most Reverend Robert J. Brennan, Bishop of Brooklyn, regrets to inform you of the death of Reverend Monsignor Terrence J. Mulkerin, a retired priest of the Diocese of Brooklyn. Monsignor Mulkerin was born on September 29, 1935, was ordained to the Priesthood on June 3, 1961, and died Monday, October 24, 2022.

Monsignor Mulkerin served the Diocese of Brooklyn as Parochial Vicar of the parishes of Incarnation (Queens Village), Saint Paul (Brooklyn), and Our Lady of Lourdes (Queens Village). He was also in residence at the parishes of Holy Name of Jesus (Brooklyn) and Saint Joseph Labre (Richmond Hill). Monsignor Mulkerin served as the director of the Missions Office and was also Military Chaplain of the U.S. Navy.

He received the honor of Chaplain of His Holiness in 2012.

Please pray for the repose of his soul and for the consolation of his family and friends. May he rest in the peace of Christ, the Risen Lord. If you wish to send condolences, please mail to Deacon Matthew Oellinger, Immaculate Conception Center, 7200 Douglaston Parkway, Douglaston, New York 11362.

DIOCESE OF BROOKLYN TO HOST ANNUAL MASS OF HOPE AND HEALING

The Diocese of Brooklyn will host the annual Mass of Hope & Healing tomorrow, Thursday, October 13, at 7:00 p.m. at Resurrection-Ascension Roman Catholic Church, located at 85-25 61st Road in Rego Park, Queens.  The Most Reverend Robert Brennan, Bishop of Brooklyn, will be the Main Celebrant and Homilist at the Mass.

This sixth Mass of Hope & Healing is an opportunity to come together as a Diocese and pray for Victim-Survivors of sexual abuse and all those impacted by sexual abuse. This will mark Bishop Brennan’s first Mass of Hope and Healing and the first since 2019, due to the Coronavirus pandemic.

The Mass will be broadcast live on the Diocesan cable channel NET-TV available on Verizon Fios Channel 548, Spectrum Channel 97, or Channel 30 on Optimum. The Mass can also be watched online at https://netny.tv/.

Members of the media are welcomed and are encouraged to respond via e-mail to confirm their attendance.

Rosary Recited in Five Languages in the Diocese of Brooklyn

to Mark the Feast of Our Lady of the Rosary

In celebration of today’s Feast of Our Lady of the Rosary, DeSales Media, the communications arm of the Diocese of Brooklyn, is debuting the 2022 Rosary Rally. However, this is no ordinary recitation. The Most Reverend Robert Brennan, Bishop of Brooklyn, prayed the Rosary with school children from the Diocese in five languages: English, Spanish, Creole, Polish, and Mandarin.

“It was moving to see the students in the large round sanctuary, who created a living, multicultural rosary. It showed the international flavor of our schools as the students prayed in the language of their heritage with confidence,” said Bishop Robert Brennan.

“What struck me is the Catholic identity of who we are is in our prayer. It’s in the extra things that we do. The Rosary has such power, literal power to transform, heal, and help. These kids knew that, and they were comfortable with it, and it bolstered my faith watching them,” said the new Superintendent of Schools, Deacon Kevin McCormack.

Bishop Brennan reminds the faithful what he told the students “pray what you can, not what you can’t.” The Rosary is a powerful tool, whether you pray the entire thing, one decade, or none of it. “When you can’t pray, when you are so lost, when words can’t come to you, just hold the Rosary in your hand, treat it like a lifeline, hold it, and let yourself be held by God. That in itself is a prayer.” 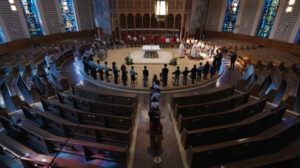 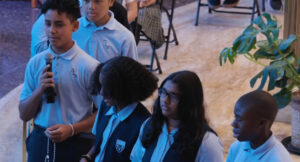 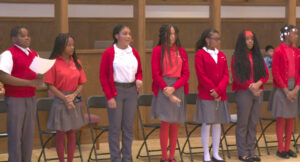 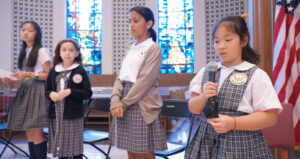 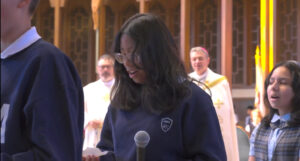 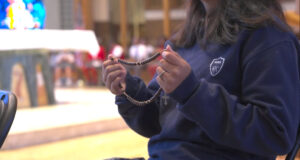 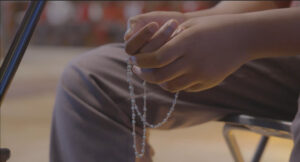 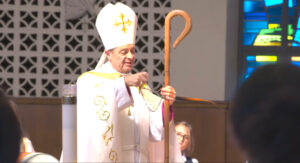 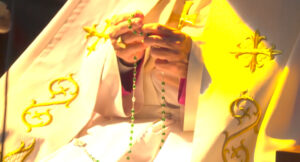 A big city Catholic since he was a boy, Brooklyn’s new Bishop Robert Brennan now hosts a new weekly podcast titled ” Big City Catholics,” where he talks to the faithful through this modern and popular form of communication.

Raised on Long Island to a father who was a New York City police officer, he often spent time in Brooklyn and Queens, never thinking one day he would be the Bishop of Brooklyn. Now back home in New York, following a brief tenure as Bishop of Columbus, Bishop Brennan’s podcast shares stories of his travels throughout the diocese and the pastoral joys of his episcopal ministry in the “big city.” Co-host Father Christopher Heanue joins Bishop Brennan as they explore questions of faith that impact the everyday lives of parents, friends, and professionals living in the big city with all its challenges.

“For more than two thousand years, the Catholic Church has shared the message of Jesus Christ in every corner of the world and by all means possible. But we know there are people who either haven’t heard or truly do not understand the love and compassion God has for each of us. I pray that this podcast will both reaffirm the faith of listeners and engage those who have stood on the sidelines. May our new audience come to understand and know the power of God,” said Bishop Robert Brennan.

“For me, it is an honor to be asked to participate with Bishop Brennan in this great endeavor. In every role we have, Christ has a special purpose in mind for us, and so we explore what it is that Jesus Christ is calling us to do today,” said Father Christopher Heanue, Rector of the Co-Cathedral of St Joseph.

The latest podcast features Monsignor James P. Shea, author of the ground-breaking book, From Christendom to Apostolic Mission. Monsignor Shea has been the sixth president of the University of Mary in Bismarck, North Dakota, since 2009.

Big City Catholics is available on popular podcast platforms, including Apple, Spotify, and YouTube, or on the Diocese of Brooklyn website, podcast.dioceseofbrooklyn.org. 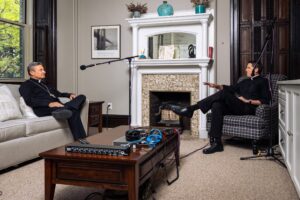 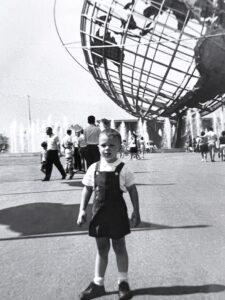 On November 30, 2021, Bishop Robert Brennan was installed as the Eighth Bishop of the Diocese of Brooklyn, serving the people of Brooklyn and Queens. Born in the Bronx and raised in Lindenhurst, Long Island, Bishop Brennan attended St. John’s University, where he earned a Bachelor of Science degree in mathematics and computer science. He then studied for the priesthood at the Seminary of the Immaculate Conception in Huntington, New York.

On a national level, Bishop Brennan serves on the Pro-Life committee of the United States Conference of Catholic Bishops.

Father Christopher Ryan Heanue is the Rector of the Co-Cathedral of St. Joseph located in the Prospect Heights section of Brooklyn.

He was ordained a priest by Bishop Nicholas DiMarzio on June 27, 2015. Father Heanue was raised in Blessed Virgin Mary Help of Christians parish in the Woodside section of Queens, also known as St. Mary’s Winfield.

He is a graduate of Cathedral Prep, spent one year at the Pontifical Gregorian University in Rome, and completed his studies at St. Charles Borromeo Seminary in Pennsylvania. He earned his Bachelor’s degree in Philosophy with a minor in business from St. John’s University and was awarded a Master of Divinity from St. Charles Borromeo Seminary. Father Heanue was awarded a Master’s in Business Administration from St. John’s University in May 2021.

In January 2018, Bishop Emeritus Nicholas DiMarzio named him the leader of the Irish Apostolate of the Diocese of Brooklyn.